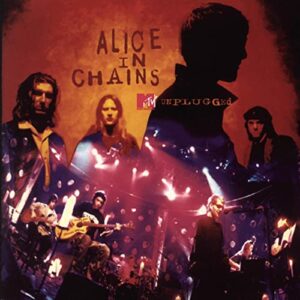 Occasionally I’ll go through musical phases. When one specific genre crosses my headphones, I’ll be stuck on it for months, abandoning all others during that period. Today’s featured act was one that I always enjoyed but have grown to appreciate more as I’ve aged. And for some reason, I was off their music for far too long.

What seems like a decade ago, I discussed the top selling album by the band Alice in Chains (AIC). While that post goes into a lot of detail surrounding their formation and second album (which is phenomenal)—I want to move on to a later time frame for the band. When Dirt came out in 1992, AIC were seemingly on top of the world with a multi-platinum selling record and an extensive world tour. Their next move was an acoustic-based EP called Jar of Flies that released in January of ’94. It would spawn singles “No Excuses” and “I Stay Away” —both charted and the EP gave AIC their first No.1 single on the Billboard 200. While it seemed they had the Midas touch now, lead singer Layne Staley entered rehab for heroin addiction. They were supposed to tour the summer of ’94 with Metallica as well as perform at Woodstock ’94, but all of that got put on the back burner. AIC took a six-month hiatus—and it seemed like the group may be done for good.

Staley joined a supergroup called Mad Season for 1995—which I’ll have to discuss here at some point in the future—but AIC was back in the studio late that same year putting out their third studio album in November. No live performances took place during this time because of Staley’s addiction issues. Suddenly though, AIC resurfaced in April of 1996 to perform their first live show in over two and a half years. It was part of the MTV Unplugged series featuring all-acoustic setlists. That record debuted at No. 3 on the 200 charts and sell nearly ten million albums to date. It had most of their top tracks featured, which was somewhat rare for the show—many times bands would do lesser-known songs or covers, just to mix it up. Their friends from Metallica were in attendance, which is why you hear a couple of their riffs as intros to AIC songs. Despite the taping taking over three hours due to errors in equipment, the band loved the performance. Co-front man Jerry Cantrell said his favorite moment was Staley saying, “I wish I could hug you all, but I’m not gonna” to the audience.

Some critics were legit curmudgeons upon initial release, suggesting the album didn’t offer anything previous releases didn’t. Some noted the songs sounded like novelties, since AIC was a harder band, and these were acoustics. Rolling Stone even felt it lacked any sort of electricity. Simply put—they were wrong. Now it’s considered one of the most iconic live records ever created. For me, it’s a second to Nirvana’s—but that is, frankly, a masterpiece. AIC’s Unplugged album gives such a more intimate look at Alice in Chains as a band—and their overall talent. Many are critical of groups that stand on stage and blast you with a guitar and a non-quality vocal. This is anything but that. Staley’s vocal was on absolute point, even with all of his struggles. And the band showed they had a range that was more than face-melting riffs and toe-tapping drumbeats. They could have put anything out next, and it would have done extremely well.

Unfortunately, Staley fell back into drugs—he was found unresponsive after overdosing in July of 1996. AIC never officially disbanded, but Staley became a recluse and he’d never perform with them again. He passed away in 2002, with Alice in Chains moving on without him prior to his passing. Give this acoustic standard a shot today. Whether you’re down in a hole, or you’ve come to snuff the rooster—I think you’ll love it.