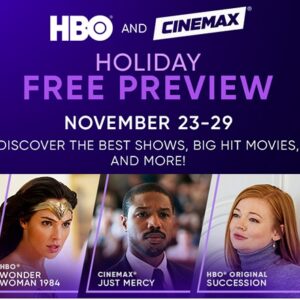 Give thanks for a HBO and Cinemax free preview!

TDS TV and TDS TV+ customers, you’re getting an extra Thanksgiving treat: a free preview of HBO and Cinemax!

The preview begins Nov. 23 and runs for an entire week (ending on 11/29). Remember that there are 15 (yes, 15), different channels included with HBO and Cinemax so there’s lot to watch!

Here’s just a few ideas for new and hot programming you can enjoy:

When the preview is over, give us a call at 1-888-225-5837 to add HBO and Cinemax to your lineup so you can keep enjoying all the options on your TV (plus you’ll also get access to HBO Max and Cinemax Go, too!).

One Response to Give thanks for a HBO and Cinemax free preview!