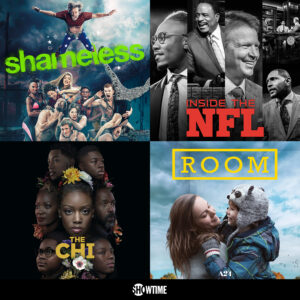 Get SHOWTIME for 50% off

With the weather turning colder, it’s the perfect time to cozy up on the couch and watch great shows and movies—and now you can get them for half off!

For a limited time, new SHOWTIME® subscribers can purchase this premium channel for only $5.50 a month! That’s half off the regular price of $10.99 a month (which is still a great deal). The promotional price lasts for six months and you only have until Dec. 31 to score this deal.

SHOWTIME® is more than a single channel—it’s actually eight different channels that feature critically-acclaimed original series and limited series, groundbreaking documentaries and docu-series, hit Hollywood movies, and hilarious comedy specials. Even better, there are no commercials. Not one.

Only SHOWTIME® has 2020 Best Actor nominee Don Cheadle in Black Monday. A dark comedy set in 1987, the year leading up to Black Monday, the series follows the employees of a second-tier Wall Street trading firm called the Jammer Group. It’s the story of how a group of outsiders took on the blue-blood, old-boys club of Wall Street and ended up crashing the world’s largest financial system and the glass ceiling.

Check out the four-part docuseries Love Fraud, which follows the search for Richard Scott Smith who used the internet and dubious charms to prey on unsuspecting women looking for love. Or how about a little drama with the gripping We Hunt Together. The British show features two conflicted detectives as they track down a pair of deadly killers, revealing how finding a volatile form of solace in another can have dire consequences. Don’t forget about The Chi, Shameless, The Affair, Inside the NFL and lots and lots of other great shows.

And movies! Don’t miss 21 Bridges staring the gone-before-his-time Chadwick Boseman as an NYPD detective who shuts down the eponymous 21 bridges of Manhattan to find two suspected cop killers. Or Hustlers, based on a true story and starring Jennifer Lawrence as the leader of a group of women who use their strip-club skills to outwit wealthy Wall Street clients—just to name two of hundreds of options (including some great horror flicks just in time for fall!).

So what are you waiting for? Call 1-888-225-5837 today to upgrade to SHOWTIME® at a special low rate and start watching acclaimed series and blockbuster hit movies and more!