We have some good news and some bad news, TDS TV® customers.

First, the good news
INSP Network is coming to TDS TV! On February 8th you’ll find it on channel 146 in standard definition and 1146 in HD as part of the Expanded Plus tier.

INSP is all about family-friendly programming. In fact, they call their lineup “lunge-free TV.” Why? Because viewers don’t have to lunge for the remote when kids come in the room—all the programming is A-OK for kids too.  In fact, INSP has the Parents Television Council seal of approval.

But there is also original programming such as:

State Plate
Join musician and restaurateur, Taylor Hicks for the tastiest, most delicious tour of the United States! We love our landmarks and monuments, but on this road trip it’s all about sightseeing and tasting some of the states’ most symbolic and popular foods 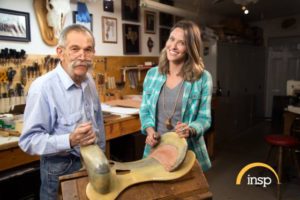 Handcrafted America
Host Jill Wagner, is on the road, traveling the country—on backroads to freeways, urban centers to rural hideaways, from Hawaii to New Hampshire—seeking out artisans dedicated to crafting fine products the traditional way…with their own two hands. From spinning yarn to honing spurs, Jill takes you into the studios and into the lives of this season’s extraordinary American artisans.

And now for the bad news
NBCUniversal has decided to shut down Cloo Network, effective February 1. This is impacting every content provider in the country, not just TDS. NBCUniversal has simply decided to not move forward with this programming. You previously found Cloo on channel 126.