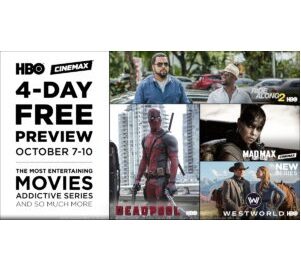 Free preview of HBO and Cinemax this weekend

Every few months, it seems like everyone is talking about a great new show on HBO. Right now that show is the sci-fi thriller “Westworld,” which premiered last weekend.

Did you miss it? Here’s your chance to catch up: HBO and Cinemax will be available as a free preview for all TDS TV customers Friday through Monday (October 6-10). Click here to see where you can find the networks in your channel lineup.

That means you can watch the season premiere of “Westworld,” which will air throughout the weekend, plus the second episode on Sunday. Then you’ll be ready for post-show chit-chat at the office Monday morning. Here’s a taste of HBO’s latest triumph:

If that doesn’t look like your cup of tea, you’re bound to find something else you’d like to watch: Sarah Jessica Parker’s new comedy “Divorce” and Issa Rae’s new comedy “Insecure” both premiere Sunday, and there will be new episodes of “High Maintenance” on Friday and “Last Week Tonight with John Oliver” on Sunday.

For folks with longer attention spans, the Ice Cube / Kevin Hart buddy copy blockbuster “Ride Along 2” premieres Saturday, and “Deadpool,” “The Revenant,” “Alvin and The Chipmunks: The Road Chip” and “The Bourne Ultimatum” are among the other hit movies on HBO during the free preview. “Straight Outta Compton” will air too, if you prefer the Ice Cube of the late 1980s over the current version.

On Cinemax, don’t miss the new episode of the gripping crime drama “Quarry” or the premiere of the holiday horror film “Krampus,” both on Friday. Other movies airing on Cinemax this weekend include “Mad Max Fury Road,” “Live Free or Die Hard,” “Magic Mike” and “The Hobbit: The Battle of The Five Armies.”

The two networks’ on-demand services—HBO OD and MAX O—will also be open during the preview, giving you access to a treasure trove of great movies and original series. So will HBO Latino, featuring season three of both “Magnifica ’70” and “El Negocio,” plus the satirical news program “Chumel con Chumel Torres.”

Again, the free preview begins Friday and runs through Monday. When it ends, if you think you need more HBO and Cinemax in your life, you can add them to your TDS TV package.