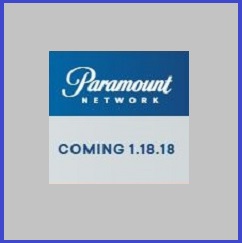 Starting tomorrow, January 18, Spike TV (channels 116 and 1116) will become Paramount Network. Viacom, the channel’s owner, decided on the switch which will include not only a new name, but also a broader lineup of programming.

The network will officially launch at 9 p.m. CST with a live, one-hour Michael Jackson-themed Lip Sync Battle, the most popular show from Spike. Two other shows—Ink Master and Bar Rescue—will also be staying put along with Bellator MMA fighting. Although you’ll still find some old favorites, there is a lot of new and original programming coming to Paramount Network.

On January 24, a six-part miniseries called Waco, about David Koresh and the Branch Davidians will premiere. (Note that it stars some big hitters, such as Taylor Kitsch, Michael Shannon, and John Leguizamo.)

Also watch for two original comedy series. The first, Heathers, is a “modern-day re-imagining” of the dark comedy from 1988 (the original staring Christian Slater and Winona Ryder) premiering March 7. The second stars Alicia Silverstone and Mena Suvari, in a show called American Woman, set amid the sexual revolution and rise of feminism in the 1970s (premieres June 7).

There’s also a new drama coming, staring the award-winning Kevin Costner. Yellowstone, centers on one family who controls the largest ranch in the U.S. Reports describe the show as a cinematic in tone and production. The show premiers June 20, and since apparently it’s one of the most expensive series in TV history, it could be quite epic.