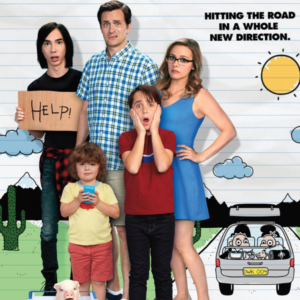 Did you know that TDS TV on Demand serves up dozens of new movies every month? We have films for every age group and from every genre, including comedies, thrillers, documentaries, dramas, horror and much, much more. This month, we are offering up a couple of sequels and prequels, including the comedy “Diary of a Wimpy Kid: The Long Haul” and the science fiction flick “Alien: Covenant.” There is also a new take on the King Arthur legend, the tense war thriller “The Wall,” and the comedy “How to be a Latin Lover.” Enjoy these—and many other titles—on TDS TV Movies on Demand.

The latest “Wimpy Kid” flick is an amiable and fast-paced comedy. Our hero, Greg, schemes to take his family road trip off course—to a video gaming convention. The cast is enjoyable and engaging (especially Alicia Silverstone as the mom), and the jokes are fun (if a bit predictable). Perfect for the kids.

Director Guy Ritchie puts a fantasy spin on the King Arthur legend. The result is a wild, entertaining ride. The CGI-laden film gets silly and bombastic at times, but the action is first-rate and it doesn’t take itself too seriously. This version, however, isn’t for everyone. For fans of the traditional view of King Arthur and the time period, you need to tuck away your old views of the legend—and just enjoy this very different take on the subject matter.

“Alien: Covenant” returns the franchise to its roots—the crew of a space ship find an uncharted planet that is perfect for colonizing. Unbeknownst to them, a dark and dangerous terror is not far off. The film is a well-crafted, tense thriller with a high dose of gore and shocks. Kudos to leads Michael Fassbender and Katherine Waterston, who are outstanding.

HOW TO BE A LATIN LOVER
Available August 15. Rated PG-13.
Copyright Lionsgate

A man who has made a career out of seducing older women finds himself kicked to the curb after 25 years of marriage. “How to be a Latin Lover” lacks subtlety, but it makes up for it with a good cast and some genuinely funny moments. Eugenio Derbez goes all in as the aging Latin Lover who finds meaning in life when he moves in with his sister. The strong supporting cast includes Selma Hayek, Rob Lowe, Kristen Bell and Michael Cera.

Simple yet immensely tense and effective film about two American soldiers trapped by a deadly sniper. “The Wall” is more psychological thriller than war film, but succeeds due to its intensity and the raw emotions it conjures up. Aaron Taylor-Johnson and Jon Cena play the soldiers facing an unseen enemy.

Alien: Covenant, Diary of a Wimpy Kid: The Long Haul, How to be a Latin Lover, King Arther: Legend of the Sword, The Wall