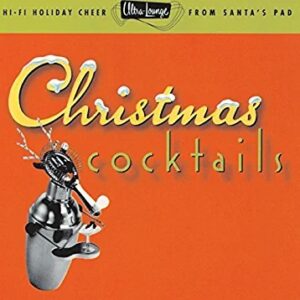 If last week’s holiday album wasn’t off the wall enough for you, this one might be right up your alley. While we’re a long way from barbershop quartet carols, it’s not by as much as you might expect. With that introduction in mind, let’s just dive in.

Ultra-Lounge is a series of compilation albums released by Capitol Records, typically featuring artist and styles predominantly from the 1950s through 1960s. Genres could vary wildly on each, going from genres like space-age pop to mambo—you’ll even hear an occasional television theme song plopped in there. The series started in 1996 when the swing revival was in full gear thanks to bands like Brian Setzer or Squirrel Nut Zippers. Each album featured two related cocktail recipes, tips on how to serve drinks to guests, and often photographs of sculptures made out of bartender items and other household objects. A couple of the volumes even managed to make it into the Billboard jazz top ten—no small feat. Over the couple dozen Ultra-Lounge records released, there have been a little over a million sales in total to date. In 1997 they won a Grammy Award for Best Recording Package, something I had no idea existed until today.

Today I’m listening to one of the Christmas music renditions—specifically the first one, aka Part One. This is a bit all over the map. Featured artists include Lou Rawls all the way to Jackie Gleason. In terms of the song selection, it’s a bit more robust from last week. This one is twenty-one tracks deep, coming in at just over an hour in length. We’ve got mostly standards, but often presented in a way that you’ve never heard before. Rudolph, as example, gets a very eclectic mashup with an almost swing-based vibe with some Little Richard shouting vocals behind it. Truly unique. Then, track three is basically a trumpet solo for five minutes, eclipsing two different holiday staples. I can safely say I hadn’t heard of probably half or so of the tracks before, so that alone is kind of nice. Usually you just get the same recycled tracks, done in slightly different ways. Originals (if they in fact are original) are always appreciated by this music enthusiast.

Four hundred words in on this blog, I’m not too sure what else to say about this one other than it’s truly a fun listen. It’s not going to be as predicable as last week’s entry, so be a bit prepared for that—but with that said, this one is also well worth checking out. In fact, it maybe even a bit more worth of tossing on than Mills Bros, only because it’s something truly different. I could easily see decorating for Christmas, loading up your Amazon Music or Spotify account on the big speakers and letting this blare while you get into the holiday spirit. Because of the instrumental nature of a few songs, you may not be able to sing along, but even the trumpet solo track gets the toes tapping and it might as well be snowing outside for real, because it will be in your mind.

The best way to spread Christmas cheer is singing loud for all to hear. A movie called Elf taught me that. So keep putting on the holiday tunes and spread that cheer. Merry Tuesday-mas!

TDS and SHOWTIME team up for free preview Dec. 9-13
Check out this Week of Giving wrap-up!