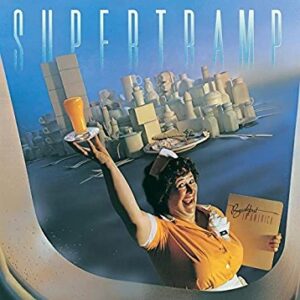 Looking back at last week’s post, I’ve decided to keep the theme going of revisiting a great group. I’m following up on an artist that we haven’t talked about in far too long here on the blog. Since I’ve been oddly obsessed with their music recently anyway, this week’s entry is a win-win for me. I think you’ll enjoy taking a listen, too.

Back in 2016, we talked about a band and their millionaire benefactor. Supertramp had put out their third commercial release and finally started to pick up some traction on a global scale. After that success, they moved to the United States in 1975 which ramped up the pressure to maintain their sales and popularity. Since dozens of songs were recorded for Crime of the Century and not used, they threw them together to make album number four. The band considered it their lowest moment in their history since the release was rushed out while between two tours—but critics enjoyed it, and much later, a couple of the members felt it was their best album. In spite of the critical acclaim, it was a commercial flop in both the U.K. and the U.S. Their fifth album came out in 1977 and spawned one single, “Give A Little Bit”— which is still in heavy rotation today. That bought the band a bit more time from the label, and they moved to Los Angeles to solidify their spot in the industry.

Feeling they needed to come up with something new and different, Supertramp decided to run with a more pop-oriented approach for their sixth album. Co-founder Roger Hodgson took the effort personally, parking a camper outside of the studio to focus on recording and mixing, with brief naps in between. He and the label felt they were close to hitting it big, so the attention to detail was intense. Breakfast In America hit shelves in March of 1979. Critically, it was a pretty big victory for Supertramp. Rolling Stone referred to it as, “a textbook-perfect album of post-Beatles, keyboard-centered English art rock that strikes the shrewdest possible balance between quasi-symphonic classicism and rock and roll.” Long-windedness aside, it also sold a lot of albums. Five million alone in the states, with another ten or so worldwide. It is their best-selling album to date, by a pretty wide margin.

When I mentioned being semi-obsessed with Supertramp’s catalog recently, quite a few of their hits come from this album. It spawned four commercial singles, and they’re all staples in rock history. Younger audiences who are fans of the NBC hit show “The Office” may remember Supertramp’s “Goodbye Stranger” being parodied by Michael Scott and turned into “Goodbye Toby”—a classic episode. But that grandiose theater rock that Supertramp was great at, especially on this album, is incredibly timeless. You can listen to the title track, “Breakfast In America,” and you can’t help but hear it once and sing it in your head the rest of the day. Even the non-popular tracks have this quality and arrangement detail that sticks with you. Simply put, they did a great job.

This is probably my final Supertramp entry for what’s now called Streaming Tunes Tuesday since their later albums didn’t quite hit the mark and they had some band turmoil. But what better way to end it with ‘70s progressive/art rock perfection? Give this a shot, and don’t you look at my girlfriend, she’s the only one I got!