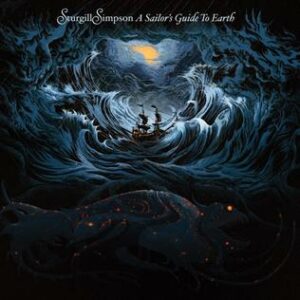 By Austin Krueger on October 4, 2022 in Online Life

Since we’ve been on this music journey together so long now, I’m certain I’ve told you about my love of road trips and listening to music while driving across the country. I had a chance to do that last week Thursday, and I think I stumbled upon a solid new artist. Well, not new to the world, but new to me—and maybe he’ll be new to you too!

John Sturgill Simpson was born in June of 1978 in Jackson, Kentucky. Sturgill comes from his paternal grandmother’s maiden name—who was also from Kentucky. His dad was a Kentucky state trooper and often worked undercover. Because of that, the family moved around a bit, finally settling outside of Lexington. His mom’s family were all coal miners, and John was the first male in the family tree to not work in a strip or deep mine. John’s parents divorced when he was in seventh grade, and he admits he wasn’t a great student. He struggled to finish high school and immediately joined the Navy upon commencement. After three years served, he waited tables at an IHOP in Seattle and formed a band called Sunday Valley. John quit the band and set music aside for a bit while moving around the country. It was his wife who nudged him back into open mic nights and gigs, even to return to the band. After the band officially broke up around 2012, John and his wife moved to Nashville and that’s when his career actually began.

Going by Sturgill Simpson on stage, he went solo and started to get noticed. His self-funded debut album came out in 2013, which somehow featured some guitar work from the legendary Waylon Jennings. Several critical outlets thought this guy was onto something—but needed to keep putting the pieces together. I’m fast forwarding based on those reviews to his third studio effort, titled A Sailor’s Guide To Earth that debuted April 2016.

Simpson had been working on the album for a while—to the point that, when it was announced, it was already complete. He put the extra effort so he could wrap it up and spend some time home with his family for around six months. Two singles were released prior to the album, both of which saw some success on the charts—but it was the second one that caught my ear and put me in touch with Sturgill’s music. That song was a cover of Nirvana’s “In Bloom” that he self-describes as, “a very beautiful and pure homage to Kurt [Cobain].” To say it caught my ear would be underselling it. It might not go immediately to my top five all-time covers, but it’s really solid. I’ve probably listened to it fifteen times since last Thursday.

Don’t just take my word for it though—what did the professionals say? The album won Best Country Album at the 59th Grammy Awards and was also nominated for Album of the Year. It even debuted at No. 3 on the Billboard 200 and No.1 on the Top Country Albums charts. The album has sold roughly a million copies to date, but it was the Grammy wins that truly boosted his notoriety. His streams went up 500% after he won, which goes to show you those awards really do mean something. Style wise, this album is all over the board. It’s country, no doubt about it, but there are also elements of soul, alt rock/alt country and certainly rock. The Nirvana cover really changes up the vibe of the album too but overall, it’s not your grandfather’s country album—and I think that’s why Sturgill has remained popular. He’s offering something unique and isn’t afraid to take risks. Fans love that.

With four more studio releases since Sailor’s Guide, Sturgill’s been busy! One day soon I’ll get back to those, and maybe one of these years I’ll blog about him again. Until that day, pick this one up and give it a listen. If you’re like me, you’ll dig it. And if you love country music, I’m guessing you’ve already listened to it, so toss it on the headphones again today. Happy Tuesday!

Fall sun outages could impact your video signal
Beyond Amazon: Other big online sales worth checking out