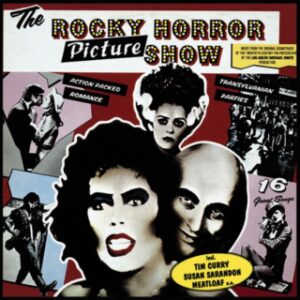 Continuing on last week’s “spooky” theme, I wanted to find another Halloween-based record for you all. I could have done another metal-esque album but thought better of it. In fact, today’s featured album couldn’t be further from metal—but the glam rock aspect of it? This has it in spades. Heck, it very well may have created the genre.

All the way back in 1973, there was a film titled The Rocky Horror Picture Show that opened in theaters across the universe. If you somehow lived under a rock and have never heard of it, it’s a musical comedy horror movie that blends the lines between film and musical. Although the film is based off the stage production, the movie is a tribute parody to science fiction and B horror films from the 1930’s through 1960’s. The initial reaction to the film was not positive, but over time it became the quintessential “midnight movie” where you could watch it late at night on the cheap. This allowed Rocky Horror to gain a crazy, cult following—one that continues to this very day. It is not uncommon to stroll the streets of a major city on a Saturday night and see droves of people dressed up in character to go see the movie.

Anyway—this isn’t a film blog, it’s about the music! Because of the popularity of the film, the studio decided to release the film’s soundtrack as an album in 1975. Just like the film, the soundtrack success did not happen immediately. In the U.S., it would finally chart on the Billboard 200 in 1978. I’m not sure why, but it was extremely popular in Australia and New Zealand, reaching No. 12 and No. 11 on their charts, respectively. Initially, there was frustration from fans about the track listing—apparently two songs from the movie were omitted from the original album, which didn’t sit well. It wasn’t until the 25th Anniversary version that there was a definitive collection of tunes from the film. The album got another major bump in 2010 after the smash hit television show Glee had a “Rocky Horror Glee Show” episode. How popular? The album charted at No. 55 again on the Billboard 200.

What is there to say about this? If you know it, you can belt out every single tune on the soundtrack and you’ll do it with vigor. If you’re like me (sorry fans, I’ve never seen the film), this is sort of out of left field. It listens like a theatre production for sure. But when you hear this and imagine an actual band performing the songs all dressed up, it starts to come together. Even more, when you think of bands like Twisted Sister, or even Kiss—it’s not a stretch to feel like this movie kind of started the notion it was OK for music and theatre to mix. It is basically glam rock and it blazed a music trail that I think bands including Queen mimicked with success. There are other elements to this album too—there are heavy elements of pop music, a sprinkle of rock and maybe a teeny bit of metal in spots. Overall though, this is the soundtrack to an eclectic film, and there is no mistaking it. The only artist I’d say I can think of that feels close to this, is David Bowie….well, maybe I’d toss Meat Loaf in there as well (it has that “Paradise by the Dashboard Light” vibe).

If you’re like me and haven’t seen the movie, give the soundtrack a shot today. If nothing else, it’ll give you an inside peak as to whether or not you should devote the time to get dressed up and go see it. Get loads of candy this week and get ready to see all sorts of ghosts and ghouls come up to your door. Happy Halloween!