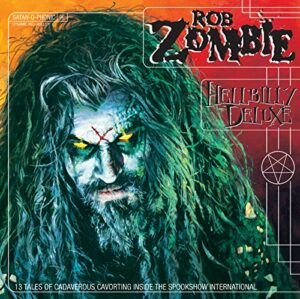 STT devotees may have realized over the years that occasionally I try to review albums relating to the holiday seasons. Well readers, Halloween is just around the corner. What exactly is Halloween music? I don’t really know, but I think there are artists that adhere to a darker, spookier feel in their work. Let’s dive in to one of those very artists today—listener discretion advised!

Robert Bartleh Cummings was born in Haverhill, Massachusetts in January of 1965. He was the oldest of two boys, both of whom would ultimately end up in the music business. Growing up, Robert was fascinated by horror films and stated his influences were Alice Cooper, Steven Spielberg, and Stan Lee. Their mom and dad worked in a carnival but eventually stopped when riots broke out at a show and their tents were set ablaze. Robert recalls, “Everybody’s pulling out guns, you could hear the guns going off. I remember this one guy we knew he was telling us where to go, and some guy just ran up to him and hit him in the face with a hammer—just busted his face wide open.” Horrifying, to say the least. Robert graduated high school in 1983 and immediately moved to New York City and attended the Pratt Institute. It was there he’d meet his future bassist band mate, and how he, oddly, become a production assistant for television series Pee-wee’s Playhouse.

Robert decided he needed a stage name, and Rob Zombie was born. The name was adapted from a 1932 horror film titled White Zombie—a name he’d also end up using for his band. From 1985-1998 White Zombie (the band) ruled the hard rock radio waves. In ’97 Rob began working on his first solo effort, and the band broke up. The debut was titled (wait for it), Hellbilly Deluxe: 13 Tales of Cadaverous Cavorting Inside the Spookshow International. Phew! The album title was actually a play on country music icon Dwight Yoakam’s record, “Hillbilly Deluxe”. It hit shelves in August of 1998, just a day after lead single “Dragula” was getting crazy amounts of U.S. radio play. It would debut at No. 5 on the Billboard 200 and sell well over 100k the first week. To date, it has sold roughly ten million worldwide.

Critically, I think several simply didn’t know what to do with this. Some described it as having a “horror carnival” theme adding, “it’s a hard rock marathon with industrial, techno and Gothic influences.” I’m actually going to mostly agree with that analysis. But I’d also say, if you’re a fan of metal, this hits pretty hard. It can be a bit monotonous, so if “heavy” isn’t your bag, you may want to skip this one.

In my opinion, it’s easy to compare this album to a slasher movie. It’s not going to be for everyone, but those that love it, REALLY love it. And as I’m listening to the full album today for the first time, I totally get it. I adore harder rock music with great riffs and beats. Hellbilly Deluxe has that in spades—but just for kicks, he also tosses in a track like No. 5 that makes you feel you’re in a graveyard at midnight hunting for ghosts. It makes the hairs on the back of your neck stand up through your headphones. There is no question Rob’s artistry and pageantry inspired artists after him. This was metal done in a totally different way. There have even been tribute albums done for this one, where thirteen different bands covered all the tracks to show their admiration.

When you wake up in the morning and feel like a good rage, industrial metal is often a good way to get that outlet. Rob Zombie might not be the original industrial act, but he did it in a way that was both shocking and refreshing. I’ll reiterate this may not be for you but give it a shot. You may surprise yourself. Happy Tuesday!