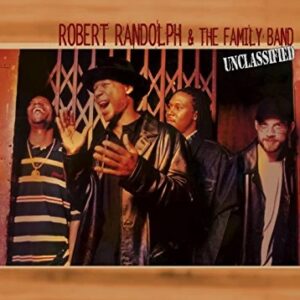 We’ve listened to bands that put out some really great music, but don’t get the accolades. Today’s featured act falls squarely into that category. They have been putting out toe-tapping, fun tunes for years, but outside of a couple of honorable mentions, the rest of the world doesn’t seem to be taking notice. Let’s try to change that today and get these guys some streaming revenue!

Robert Randolph was born in New Jersey in 1977. Growing up, he was always interested in music, and became a pedal steel guitarist for his church. While he may not have been the focal point at first, it was obvious he was incredibly talented, and the church began making him a prominent part of the music. Pentecostal churches often refer to that instrument as the “sacred steel” and Robert was so good, he went to a sacred steel convention in Florida. It was there music execs started taking notice, even if he didn’t get signed right away. Robert grew up strictly around religious music and before breaking out and doing his own thing, he played in several gospel groups. They would often tour around the country not unlike any secular band, except they would exclusively play in churches. Around 2001, he wanted to break that cycle and started to pursue creating his own group and playing his own music.

We are going to dive right into the debut album today, from the new group called Robert Randolph and the Family Band. The album was titled Unclassified and hit shelves in August of 2003. Warner Bros Records had caught wind of them after a live performance in New York as a benefit to save some wetlands. The album’s name in part references how difficult it is to put it into a single classification. I could list about a dozen genres this album touches, but it certainly centers around soul, gospel, and rock. The sacred steel gives it a vibe that you’re obviously not going to get from many other bands, especially modern ones of the 2000’s. Critically, the album doesn’t have too many reviews associated with it but the couple that exist talk about the “joyousness” of the album and view it as an inspirational album. There are some comparisons to Al Green and James Taylor—which I suppose are fair, though it’s a much more upbeat and guitar-ized version of folk rock or R&B.

Perhaps the most telling critique of Unclassified came from one of the best guitarists of all time, Eric Clapton. Somehow this album crossed his headphones, and he too fell in love with it—so much so that he invited Randolph to tour with him as the supporting act. That admiration has not waned over time either. Clapton was a guest on the group’s 2006 record, playing on a cover of “Jesus Is Just Alright”, a classic gospel song made popular by the Doobie Brothers. When I spoke of reviews earlier, the one thing Randolph can truly hang his hat on is Rolling Stone magazine putting him in their list of the top 100 guitarists of all time. Four Robert Randolph and the Family Band albums have also been nominated for Grammy Awards, including Unclassified for ‘Best Rock Gospel Album’. Though none of them have won, the group has garnered some respect in the industry. Unclassified even managed to crack the Billboard U.S. 200 charts—but sales have been modest, at best.

Robert Randolph has covered some of the most legendary guitar tracks of all time during his career and his work is idolized by many aspiring musicians. For that reason alone, you should give this a try today. But it’s also one of the most fun and upbeat albums I’ve listened to recently, and it is certain to make your Tuesday a bit brighter. Enjoy!