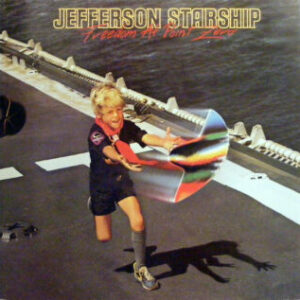 By Austin Krueger on November 1, 2022 in Online Life

Today’s post was spurred by total happenstance. Usually I have an album in mind to write about, but this week I didn’t—then I stumbled something online and BAM! Inspiration happened. It also happens to be another instance of a band I’ve heard of a million times, but yet I probably couldn’t have named a single one of their tunes. Let’s change that!

Our featured band was formed by accident, more or less. Singer/guitarist Paul Kantner recorded an album called Blows Against The Empire in 1970. It was a concept album and featured a group of ad hoc musicians, including David Crosby and Graham Nash (CSNY) and then Jerry Garcia (Grateful Dead). The LP credited the musicians as “Paul Kantner and Jefferson Starship”—the first use of that name as a band. The album was a modest success at best, but what transpired after was the group’s real origin story. Grace Slick, Joey Covington and Jack Cassidy played on that Kantner album too, and since the other featured players were already committed to bigger and better projects, those folks decided to start a new band—and they even already had a name. Despite having all of the pieces, it took another four years for Jefferson Starship to release their first studio album. Each of the players seemed to have their own project in the hopper, and Slick was having Kantner’s child.

I’m fast forwarding to their fifth album today, titled Freedom At Point Zero which hit shelves in November 1979. This was a landmark record for the group because it was the first with new lead singer, Mickey Thomas (Slick was on hiatus from the group but would rejoin for the next album). At this point in music history, Jefferson Starship had a solid following. They had several previous singles hit the Billboard 200 and their albums were selling in strong numbers. Since they had a new lead singer and had also stollen Journey’s drummer for this release, the skeptics were out in full force. When the lead single titled “Jane” hit radio waves, it peaked at No. 14 and spent three weeks in the top 100 and so some of those naysayers were quieted for a bit—but it didn’t stop critics from being very ho-hum about the album. One reviewer noted, “the band without its quirky individualists was ultimately too generic.” Since I don’t have a prior reference point, I’ll have to take their word for it but since it has sold a million or so copies in the U.S., it can’t be boring.

Where I crossed paths with this album was through social media. Someone posted a clip of a professional wrester coming out to the ring to the lead single. If you’ve never heard the song before (and I hadn’t), it’s a very spacey piano open. It’s followed by a melodic vocal while a more up-tempo piano accompanies. Now, this isn’t necessarily the standard to get a crowd pumped up to watch scripted grappling, so it was a bit of a novelty. When I watched the video, I was amused—and then noted that I couldn’t name a single song by Jefferson Starship. That’s how we ended up where we are today.

After listening to Freedom at Point Zero, I really have no clue how to categorize the sound. It’s a very sci-fi meets environmental rock meets psychedelic type feel. I guess you’d have called that “progressive rock” in the ‘70s, and that would probably make sense. It’s not really like anything I’ve heard recently, so I can see why I’m struggling. Where would they play an album like this? I’m not sure and, given the era, they likely they would have been on an island on their own. Maybe some of the more out there Pink Floyd tunes would be a reasonable comparison.

Jefferson Starship is still active and making music today. Only David Freiberg is still there from the original lineup—but the changes didn’t stop them from putting a new album out in 2020. Give this a shot today. If you’re unfamiliar like I was, check out a band that’s sold tens of millions of albums in their tenure, but don’t seem to be a household name. Happy Tuesday!