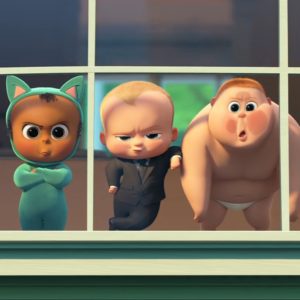 Boss Babby, Ghost in the Shell, and more coming to TDS TV on Demand

We’ve got something for everyone this week on TDS TV on Demand. First up, the whole family can sit down together and enjoy the animated “Boss Baby” (who doesn’t want to find out more about the conflict between babies and puppies?). Next, after shuttling the little ones off to bed, the adults can pick between the comedy “Going in Style” and the sentimental drama “Gifted.” After that, sci-fi fans will want to check out imaginative “Ghost in the Shell,” an adaptation of the manga classic. And finally, those in the mood for something truly unique can take a look at the wackiness (giant monsters rampaging through Korea, alcoholism) that is “Colossal.”

Babies and puppies are in a secret war for the affection of humans. The babies are lead by the ’The Boss’ – a suit-wearing, briefcase-carrying baby wonderfully voiced by Alec Baldwin. The Boss must team up with his 7-year old brother to thwart a devious plot by Puppy Co. It’s all rather silly – and convoluted at times – but the script is brisk and fun, making for an animated film that the entire family can enjoy.

Scarlett Johansson stars in the adaptation of the classic Japanese manga of the same name. Johansson plays a super soldier named Major, a woman with a mechanical body – or shell. The film is visually dazzling, and Johannson really immerses herself in the role of the conflicted cyborg. “Ghost in the Shell” will please hardcore sci-fi fans even if the plot is a bit generic.

Chris Evans plays a man raising his young niece, Mary, a mathematical prodigy. Evans wants to raise the girl to be a normal kid, but is challenged by Mary’s grandmother, who wants to send the girl to private school for gifted children. The resulting battles are pretty predictable, but “Gifted” pulls the right strings at the right time, making this a moving and emotional drama. Mckenna Grace gives a powerhouse performance as the precocious math genius.

Three retired friends decide to rob the bank after their pensions are canceled. “Going in Style” won’t win any awards for originality, but there’s a lot of like here. Three first-rate actors (Morgan Freeman, Alan Arkin, Michael Caine), witty dialogue and a lot of laughs. It’s an amiable 90+ minute ride that will make you smile.

I’m just going to come out and say that “Colossal” is a weird movie. Anne Hathaway plays a struggling alcoholic. At the same time, a giant Godzilla-like monster appears in Seoul, South Korea, and Hathaway realizes she is somehow linked to the creature’s sudden arrival. As I said, “Colossal” is a very strange film – a bizarre concoction of science fiction, comedy and Japanese monster movies – that is not for everyone. But if it sounds interesting, I’d watch the trailer, and if that strikes a chord – go for it.

Boss Baby, Colossal, Ghost in the Shell, Gifted, The Gifted