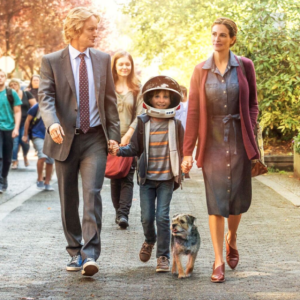 TDS TV on Demand is serving up two of the most inspiring films of 2017—the heartwarming family drama “Wonder” and the intense fire-fighting thriller “Only the Brave.” Both are outstanding films for the whole family. For those in the mood for something a bit different, “The Florida Project” and “Roman J. Israel, Esq.” feature Academy Award-nominated performances. And if you want some laughs, the girls get unleashed in the outlandish “A Bad Moms Christmas”—which is definitely not for the whole family.

Based on the bestseller of the same name, “Wonder” tells the story of August Pullman, a boy with facial disfigurements, who is entering mainstream school for the first time. The film is a classic heart-tugger, championing kindness, dignity and grace—making it a perfect movie for the entire family. Jacob Tremblay, as the young boy, carries the film with the help of Julia Roberts and Owen Wilson.

Gripping true story of the Granite Mountain Hotshots, a group of elite firefighters who would find themselves facing the ultimate test during the 2013 Yarnell Hill Fire. “Only the Brave” plays like a war film—men of different stripes are brought together to form a special unit and then are tested in ways they never imagined. Gut-wrenching and emotional, “Only the Brave” inspires and thrills in equal measures. The ensemble cast includes Josh Brolin, Miles Teller, Jeff Bridges, Taylor Kitsch, James Badge Dale and Jennifer Connelly.

Seen through the eyes of a young girl, “The Florida Project” focuses on the day-to-day struggle of life for a group of people on the fringe of society. The film is light on story, but it delivers a searing and honest study of poverty, responsibility and family. The amazing Willem Dafoe, playing a sympathetic hotel manager, has been nominated for an Academy Award for Best Supporting Actor.

The latest ‘girls go crazy’ film (such as “Rough Night” and “Girls Trip”) features three moms who turn to the dark side at Christmas when their own mothers unexpectedly show up. Mila Kunis, Kristen Bell and Kathryn Hahn have fun as the stressed out moms who unleash their inner wild thing. “A Bad Moms Christmas” isn’t very original and the jokes fall flat at times, but if you’re in the mood for some raunchy action—just check your brain and enjoy.

Intelligent and suspenseful character study of a quirky lawyer who—through a series of events is forced to test his own ideals and morals. The story is muddied at times, but “Roman J. Israel, Esq.” is compelling and honest, mainly due to the powerhouse performance by Denzel Washington in the lead role for which he was nominated for an Academy Award nomination for Best Actor.