How to play Pokémon Go—the basics to get you started

If you’d like to know what the Pokémon fuss is about, but don’t know how to get started (read: me, about five days ago), I can get you addicted teach you. As a recent newbie to the Pokémon world myself, I’ve gathered the questions and answers I’ve been searching for (and getting from other parents whose kids are now playing).

What is it, anyway?
Think of it like a treasure hunt—only the treasure is Pokémon. You “find” them in the real world by using your phone and essentially by playing the “hot or cold” game like you did when you were a kid. Only in this case, the app tells you visually whether you’re hot/close to the Pokémon or cold/further away. The goal is to find all different kinds of Pokémon, “evolve” them to make them stronger, and then win virtual battles with other people’s Pokémon. 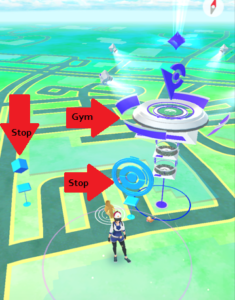 What is a Poké Stop?
It’s a place in real life where you can visit to get free virtual items to play the game. (Yes, this is why you’re seeing people on their phones by parks, or buildings, or local landmarks/points of interest.) On your screen a Poké Stop looks like two blue floating boxes tethered to the ground. As you get close enough to score some freebies from the Poké Stop, the top box will turn into a circle. Press on it, and then spin the image for free stuff.

Tip: If it looks like there’s pink confetti around a Poké Stop, it means someone hooked a lure there to try to attract more Pokémon. As such, you might want to hang around :-).

Then what’s a Poké Gym?
Gyms are the fancy, multi-level spots with a spinning tops you see on your screen. Once you’re a Level 5 trainer, you go there to train your Pokémon and battle others (virtually, of course). The gym’s color reflects what team is currently controlling it.

How do you find Pokémon?
You do a lot of walking or biking. But, you don’t just have to wander at random. By opening the “nearby Pokémon” in the lower right corner, you can roughly how far away they are by the number of footprints. If there is only one (or zero) footprints, you’re close. If there are three, it’s farther away. The Pokémon in the upper left corner is closest; the one in the lower right is the farthest.

Tip: The green blowing leaves indicate that a Pokémon might spawn in that spot, so if you’re not sure which direction to turn, head that way.

How do you level up?
You need Experience Points (XP). You get it, basically, by playing. Here are the top ways you can get XP:

There are other ways too, though. Quartz has an exhaustive chart. Also, don’t forget about Lucky Eggs—if you get one at a Poké Stop use it to collect double the XP for each capture for a half hour.

Tip: Pair Incense or a Lure with a Lucky Egg to really score.

What do you get when you level up?
If you really want to know the details, check out CNET’s chart – it’s pretty great. Levels 1-15 show here, but they have all 20!

Pokémon stats: an explanation
For each Pokémon there are Combat Points (CP) and Hit Points (HP).

If you upgrade one, you get upgrades on the other.

Evolving your Pokémon
To evolve your Pokémon you need Candy – and not just any candy. You need the type of Candy for that particular Pokémon type. You get it by collecting more Pokémon of that type. If you have too many of the same Pokémon, you can “Transfer” that Pokémon to the professor in trade for another piece of Candy.

How to battle
Head to a gym. If it’s controlled by your own team, you can pick one Pokémon to do a series of battles. If it’s an enemy gym, you select six Pokémon for your team. Once you’re ready, here’s what you do:

What to do when your Pokéball capture screen freezes
Try not to stress. Although you have to restart the app, it usually only happens when you have caught the Pokémon. If you reopen the app, you’ll probably see it in your journal. Oh! And rumor has it that if you have an iPhone 6 and you turn your LTE off, it might happen less frequently (but I haven’t tried this myself).

Is Pokémon Go safe?
That may depend on the eye of the beholder. There are concerns about kids being lured into dangerous situations and reports of injuries due to inattention—people falling off curbs, walking in front of cars, etc. Plus, there were some initial concerns about how much information you were sharing with the game inventors.

If you follow some reasonable guidelines, this mom thinks the game is safe enough. I like this guide from Lifehacker which basically says:

And I’ll add, if your kids are young, it seems like common sense to go with them (try it—you’ll probably get addicted like me!)

As for privacy the app’s concerns, make sure you’re running the latest version and, the tech press is saying, “don’t believe the hype.” Engadget just published a story saying that while the initial permissions were set poorly, it was corrected almost immediately with an update.

What does Google know about you?
Batman v Superman comes to TDS TV on Demand