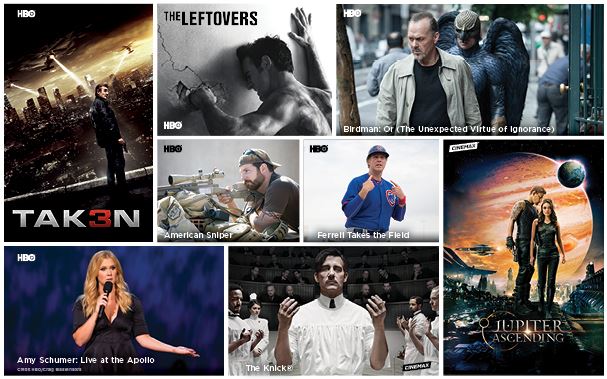 With the weather turning cooler, now’s the perfect time to curl up on the couch and catch blockbuster and award-winning films, a great comedy special, or even start a new critically-acclaimed series. The tricky part will be watching it all—HBO has nine different channels and Cinemax has seven!

Equally awesome, this weekend kicks off a half-price sale for first-time subscribers. You’ll get half off for 12 months if you sign up before November 21.

Here just a sampling of what you can watch  this weekend (times are in CST):

Taken 3, HBO
Liam Neeson is back as an ex-CIA agent, this time to protect his daughter and clear his name when he is framed for his ex-wife’s murder.
Sunday, Oct. 17 at 10:00pm

Birdman, HBO
This four-time Oscar-winning film (including Best Picture) stars Michael Keaton as Riggan Thompson, an actor haunted by his blockbuster past as “Birdman.” Playing on Friday, October 16 at 11:20am and 11:00pm, Sunday, Oct. 18 at 8:55

Jupiter Ascending, Cinemax
The newest film by the creators of the Matrix has been called “visually stunning” and “fun and inventive.” Channing Tatum and Mila Kunis star. Friday, Oct. 16 at 10:50pm

American Sniper, HBO
This Oscar-winning drama stars Bradley Cooper as Chris Kyle, the most deadly and prolific sniper in U.S. military history. Watch it Friday, Oct. 16 at 1:20pm or Sunday, Oct. 18 at 11:00pm

Amy Schumer: Live at the Apollo, HBO
The Emmy-winning comedienne in her first HBO comedy special, directed by Chris Rock, and taped at New York’s iconic Apollo Theater. Oct. 18 at 12:00am or at 1:45pm

Ferrell Takes The Field, HBO
Will Ferrell plays in five different baseball games, in all nine positions, on 10 different teams, all to benefit the charity Cancer for College. Catch it on Friday, Oct. 16 at 1:45pm.

The Knick, Cinemax
Season 2 of the series, from Academy and Emmy-winning director Steven Soderbergh, follows the staff at Knickerbocker Hospital in New York in the early 20th century. The Knick stars Clive Owen as Doctor John Thackery, as a pioneering and brilliant surgeon…and cocaine addict. You can start from the beginning on Friday, October 16 at 4:00pm and new episodes air this weekend too.

The Leftovers, HBO
Based on Tom Perrotta’s novel, season 2 of this drama continues Sunday. The series began three years after the sudden disappearance of 140 million people all at once…except for one town who didn’t lose any. The story focuses on Justin Theroux’s character, Kevin Garvey Jr., who is looking for a fresh start. Tune in for the latest episode on Sunday, October 18 at 5:50pm and 10:00pm (but earlier episodes play all weekend!).

Cheap Tunes Tuesday: Janice Joplin
Cyber security: you’re not as safe as you think you are