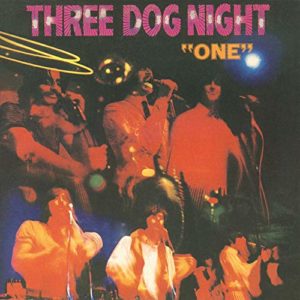 Who says you have to be able to write a great song to have a hit? Some artists don’t write any of their own material, but today’s featured act might have been the first act to really popularize it. They may have penned a few of their own tunes, but they introduced many up-and-coming writers to the mainstream.

In 1967, three vocalists Danny Hutton, Chuck Negron and Cory Wells, came together and made some recordings for Brian Wilson while the Beach Boys were working on their thirteenth studio album. At that point, they were calling themselves Redwood, but in 1968 the vocal trio was hired by a backing band. They added a guitar, drums, bass and keyboards—and soon took the name Three Dog Night.

The name came from actress June Fairchild, who was dating one of the group, after she read an article about indigenous Australians. It explained on cold nights the Australians would sleep in a hole in the ground while embracing a dingo, a native species of feral dog. On colder nights they would sleep with two and if it was freezing, it was a “three dog night.” Their official debut came at the famous Whiskey A Go Go in West Hollywood, Calif. Expecting a hypercritical audience; they were shocked to hear favorable reactions. It gave them the courage to use much of the material on their first record.

After the show, they were signed to Dunhill Records, who actually put on the show in West Hollywood. Their debut album was technically self-titled, but it was more commonly known as One and was released in October of 1968. A solid mix of pop and rock, it was fair to say they were trying to capitalize on the popular sound of the time— but put their own small twist on it.

Featuring songs written by Harry Nilsson, Steve Winwood and Randy Newman just to name drop a few, Three Dog Night were taking other artists material (with their consent) and getting them major play on the radio. Having three vocalists uniquely allowed them to interpret songs like no one else could. The first single release didn’t exactly catch fire, but eventually it would get to the Top 20 in the U.S. and Canada. When they released the aforementioned Nilsson’s “One,” the single would launch of to #5 on the Billboard Hot 100 and really started to catapult sales. The album has sold nearly five million copies, the highest-selling Three Dog Night album to date.

This is one of those sneaky bands. You hear the name and think you may know a track or two, but when you start digging into their catalog, you know 10 or even 20. From 1968 through 1974 they released eight records. Everything they touched in that period turned to gold—literally. Every album is at minimum gold status by the RIAA in the U.S.

They’d go on to cover similarly famous acts like Elton John and introduce the world to a great writer like Hoyt Axton. No one cared that the band wasn’t doing much creating of their own material, because it was just good old fashioned fun music. Fun to sing along with and fun to dance to. In 1972 they got to host Dick Clark’s New Year’s Eve special, which in those times, essentially put you at the top of the world.

Three Dog Night battled lawsuits, problematic band members and illness/addiction within the group during the ‘70s. They called it quits in 1976, but reestablished the group in 1981 and are still going in some form today. Two of the originals are still touring. Give this “one” a shot today, for only $5.99 it’s a steal. I think this one; it’s for you—even if you’re the loner in your group. Happy Tuesday!