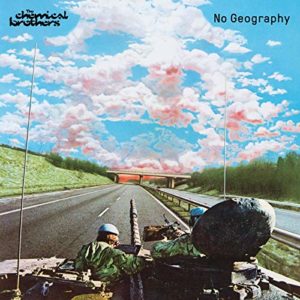 If you read this blog with any sort of frequency, it’s probably a safe bet you knew the Grammy Awards were two days ago. While I don’t subscribe to the idea that only award-winning music is good music, sometimes it’s a way to connect with bands I wouldn’t normally pick up on. Today’s featured record won twice last weekend and is a band from my youth.

Ed Simons was born in London in 1970—his mom was a lawyer and dad wasn’t around. Growing up he had two main interests: airplanes and musicals. In high school, he learned about rap music and electronic sounds and began frequenting a club called Mud Club when he was 14. Not knowing he had a future in music, he attended the University of Manchester to study history.

Tom Rowlands, a childhood classmate of Simons, was born in 1971. He got hooked on music at a very early age and started dabbling in electronic sounds in his teens after listening to all the prominent electro acts of the time. Also getting into rap, Rowlands once credited Public Enemy for releasing, the record that probably changed his life. He’d follow Simons to the same University, but for a different reason. He knew the music scene there was solid and thought it was the place to go to be inspired. Rowlands started a band but, seeing no success, turned to his buddy Simons and they started playing together.

The duo made their debut DJing at a club in 1992. Playing hyped up versions of hip-hop tunes mostly, they began running out of new material and decided to create their own. They bought a hi-fi system, a computer, a sampler, and a keyboard and started recording their own stuff. In October of that year, they formed their own label and pressed 500 copies of a couple tracks and sent them to various dance record shops in London.

While their initial efforts to gain traction in the music scene didn’t take off, they were calling themselves the Dust Brothers—in homage to the original duo from the states infamous for remixing work. When the original guys filed objections, they needed a new name and The Chemical Brothers were born.

After success remixing hundreds of tracks and working directly with artists, The Chemical Brothers dropped their first album in 1995. Fast forward 25 years and millions of albums sold later, and No Geography was released in April of 2019. Their ninth studio album, it was duo’s first release in four years.

The album takes its name from a line in the poem Geography by Michael Brownstein. The duo used a recording of Brownstein reading it on the title track. The album also features vocals from Norwegian pop singer Aurora and Japanese rapper Nene. Critical response was initially very positive, with most suggesting the band had taken another leap forward in their career.

I am most familiar with their 1997 release, Dig Your Own Hole that spawned mega-hit “Block Rockin Beats.” That album also featured guest artists like Quincy Jones and Oasis’ Noel Gallagher. Listening to No Geography today though, I can safely say it has a significantly different feel. Evolution is probably the best word to use, in the sense their tastes and styles have evolved a lot in the last 20 years. This album almost sounds like a whole new band and maybe even genre. At the end of the day, it’s a dance record and it definitely makes your toes tap—and isn’t that what really matters?

Continuing the theme of trying new things this year, give The Chemical Brothers a shot. It’s too early for me to decide if this is on par with their best works, but so far, it’s solid. And if the good people who give out Grammy’s said so too, I think that means you’ll like it. Have a beat-filled Happy Tuesday!

Data Privacy Day: Be aware of key threats
Off-Facebook Activity: see how much Facebook knows about you