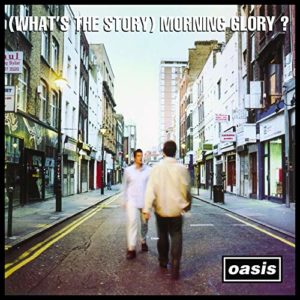 There are artists and songs that are simply institutions in the music business. When a song comes on, everyone knows it and everyone sings along. Today’s band arguably was the biggest act of their time and holds various records to prove it. But after their star shined so bright, they faded into folklore.

Back in 1991, a band called the Rain was playing gigs around the U.K. The four guys were making decent music but felt they were missing something. They booted the lead singer and auditioned an acquaintance named Liam Gallagher as a replacement. Liam’s first contribution came right away, as he suggested the band change its name to Oasis. He was inspired by another band’s tour poster that included the Oasis Leisure Center in Swindon, England.

Oasis’ first gig was in August of ’91. Liam’s little brother, Noel, was in attendance, and neither him nor his buddies thought the set was anything spectacular. Noel approached the group with several songs he’d written over the past few years. Since the band felt they had actual direction when they playing Noel’s tunes, everything else sort of settled into place. They came up with a natural sound for them and, most importantly; something they all felt could top the charts.

After nearly two years of live shows, Oasis got noticed by a label. From there, seemingly everything went wrong. Label issues, American contract troubles, a plagiarism lawsuit—you name it. In spite of all of that, they were able to put out their debut album, skyrocket to #1 and trudge on. The success hit hard, and took its toll on the band. Liam was so inebriated at a show in ’94 he offended Americans and hit his brother over the head with a tambourine.

After a temporary hiatus and a couple lineup changes, Oasis hit the studio again for their sophomore release (What’s The Story) Morning Glory. Released in October of 1995, it was a significant departure from their debut. No one seemed to mind, as it sold nearly 500,000 copies the first week. Ten weeks later, it was still #1 on the U.K. charts and topped out at #4 on the Billboard 200.

Initial reviews were harsh, mainly because it was a softened version of their first record—but over time, not only has it been recognized as an outstanding album, but a seminal record of both the Britpop era and of the entire 1990s era of music. To date, it has sold nearly 30 million copies worldwide and sits at 378 in Rolling Stone’s 500 greatest of all time. They also hold two Guinness World Records, one for “Longest Top 10 Chart Run by a Group” and the other for most successful U.K. act between ’95 and ’05, spending 765 weeks with singles in the top 75.

It’s hard to imagine anyone reading this today hasn’t sung along to various Oasis singles over the years. They have somewhat of an infectious sound that is pleasing and easy to vibe with. Is it the most substantive record of all time? Of course not—but start to finish, it’s chalked full of really good songs, arranged in a way that makes sense. Similarly to the Eagles last week, Oasis even closes the record with a nearly 8 minute symphony of a song, and it’s likely their second most well-known single in their incredibly storied career.

I can’t tell you how many times I’ve heard that extended track played on radio this year alone, nearly three decades after its release. Oasis is rock ‘n roll in all the right places, and a sprinkle of pop when you need a little boost on your evening drive home. Because of that, they likely never got their just due as a band, but when you go back and listen to this one, it’s easy to understand why they’ve nearly sold 100 million albums to date.

Classics are classics for a reason, and this one almost defines an era. 90’s Britpop has made a huge comeback, and Oasis pioneered that charge. Transport yourself back to a simpler time and pick this one up. Today could very well be the day they’re gonna throw it back to you!

What does your favorite Game of Thrones character say about you?
How to stop ads from stalking you online