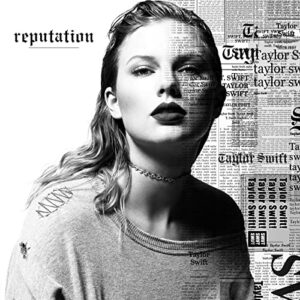 If it seems like CTT has been skewed toward pop recently, you’re not wrong. It’s not necessarily intentional, but I’ve gotten a few requests from loyal readers to dig into more modern material. Today’s featured act has been reviewed before—but this album results in a different take.

Listening to Fearless from 2008, Taylor Swift definitely has the quintessential pop vibe going. While she was perceived at the time as a country artist, that label seemed to get shed as she continued her career. Over the following decade, Swift didn’t rest on her laurels—she kept on griding and dropping major hit after hit. Three more albums were released, selling conservatively 30 million copies worldwide to date. She began working more with crossover artists, including more hip-hop into her music, collaborating with the likes of Kendrick Lamar and Future. Taylor also dabbled into acting, starting with voice roles and then making guest appearances on popular shows like New Girl. She also found herself in litigation—suing a former radio show personality for covering up a sexual assault years earlier. While that caused her to clear all of her social media accounts, her fans never waivered and her popularity seemed to do nothing but continue to skyrocket.

So, what is left for a powerful, young, female artist who had achieved pretty much all the accolades to do? Totally change your sound, obviously. A single titled “Look What You Made Me Do” hit radio in 2017 and even became her first No. 1 single in the U.K. Little did fans know that would be the beginning of her sixth album Reputation that hit shelves in November of ’17. I’m writing this and only four tracks deep—but I can safely say, this isn’t your mother’s Tay-Tay.

The hip-hop and R&B vibe is strong on Reputation, but by far the strongest genre coming through is EDM (electronic dance music for any of the newbies out there). Did the drastic departure in style finally deter her success? Nope. Over two million copies sold in the first week and topped the charts in four different countries. Her lyrics grew up a bit too. She sings about themes such as excessive media gossip and attempting to find love amidst tumultuous life events. She even started to get to this dark, brooding electronic sound—almost as if she was no longer Taylor, but had created an alter ego to record the album.

Critically, as you may expect, it was a mixed bag. Most praised her maturity and overall artistry. Rolling Stone enjoyed her “showing off the darker, deeper side of a pop mastermind.” Those that were negative regarding the album simply focused that it didn’t sound like 1989, per previous release. She still got nominated for a Grammy Award—and a bunch of others—winning most (not the Grammy). Slant Magazine even has it as their 88th best album of the entire 2010’s, which is some crazy high praise.

It’s perhaps one of her weaker performing albums, overall selling around five million copies worldwide to date. Six of the fifteen tracks ended up being released as commercial singles, all of which charted in one capacity or another. “Delicate” crossed over seemingly 100 different charts which just goes to show that even when she tries to stray from the norm, her star power washes over genres and fans of so many different walks of life.

Swift has dropped three more albums since Reputation, amassing another 10 million in sales. If this was a movie and she was the monstrous villain, us mere townspeople would be wondering, “what possibly can stop Taylor?” I’m not sure any of us will ever have an answer—only she knows. Whenever she decides to hang it up is when she’ll probably stop selling millions on whatever she touches. She was after all named Billboard’s ‘Woman of the Decade’ and the AMA’s ‘Artist of the Decade’ so someone else will really need to step up to dethrone her. Happy Tuesday!

TDS associates building towards a good cause
Check out the new, revamped My Account