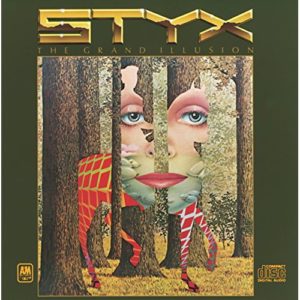 Living in the Midwest, when someone mentions a trip to Chicago, it conjures up thoughts of deep dish pizza, outstanding hot dogs, major sports rivalries, and entirely too much traffic. Rarely do most associate specific bands with the Windy City (with the exception of the Blues Brothers), since arguably the biggest act to come out of Illinois is a solo artist by the name of Kanye West. Today’s band maybe isn’t up there with the greatest acts of all time for many, but perhaps they should be.

Twin brothers Chuck and John Panozzo got together with a neighbor Dennis DeYoung while living in a suburb of Chicago on the city’s south side. Playing bass guitar, drums and vocals/keyboards respectively, they decided to start making music, even calling themselves “The Tradewinds” around town.

Chuck left to attend seminary school in 1964, but came back after a year declaring his devotion to music. After adding a member, attending Chicago State College, and a different band by the same name made it big, they trudged on until signing with a record label in 1972. The band was given several suggestions for a name change and “Styx” was their choice. When asked why, they simply replied, “it’s the only one that none of us hated.”

While seeing modest success with the smaller label, the band felt they were close to hitting it big. They re-issued the single “Lady” off their second album and it began to hit radio stations in Chicago. Nearly two years after the album’s release, it would hit #6 on the U.S. charts. With their airplay success, Styx decided to move to a larger label, signing with A&M Records. A great decision, since their first eight records with the label would be certified a minimum of Gold in the states.

Today I’m listening to their seventh studio release (third with A&M) titled The Grand Illusion which was released in July of 1977. Now known as their breakthrough album, it reached triple platinum certification and spawned a top-ten radio staple in “Come Sail Away.” The progressive rock style had been a signature of the band, but this was considered their first album to really pull all the members together, showing off the skills of each individual, but collectively.

Styx music played out theatrically in many ways, with each album seemingly telling its own story. That type of mixture of rock with a little extra was fairly common for the time, and many considered Styx to be fairly derivative. So many bands were doing synth rock at the time; the bands on the radio were often confused for one another. Normally a monster single like “Come Sail Away” leads to 10 million plus albums sold, but in their case, “The Grand Illusion” has yet to crack half of that.

Their albums were sneakily consistent though, being one of few bands to have five consecutive albums certified multi-platinum as well as having 16 Top-40 singles, including eight in the top 10. This album is perhaps not perfect, but it deserves more discussion of top albums of all time, and is certainly the band’s best effort, in my opinion.

Albeit with a drastically different lineup, Styx still tours and plays great music to this day. A few of the tracks featured on “The Grand Illusion” are not only staples for the band, but on classic rock stations all over the world—even now in 2017. Can’t beat hearing the original, especially for $5 bucks.