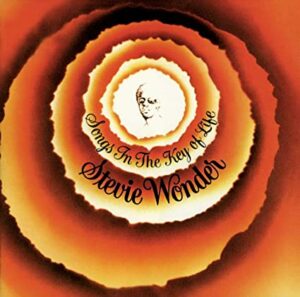 Inspiration for writing about music each week is funny. Last week it was who won big at the Grammy Awards, but this week’s artist came across my headphones (and was a major influence on last week’s group). While he’s an absolute household name, I’m a bit embarrassed to admit I’ve never talked about him! Let’s dive in.

Stevland Hardaway Judkins was born on May 13, 1950, in Saginaw, Michigan. He was his mom’s third of five kids, and his father’s second of two. Stevland was born six weeks premature, so he needed the oxygen-rich atmosphere of an incubator to survive. This caused retinopathy where the growth of the eyes is aborted and causes the retinas to detach, and essentially meant he became blind. When Stevland was four years old, his parents divorced and he moved to Detroit with his mom and the rest of the family. He began singing in the church choir and his family life stabilized, with his mom returning to the father of the first batch of her other children. His surname was changed to Moris, and he started playing instruments on top of the singing. Stevland played piano, harmonica, and drums—even forming a “band” with a buddy calling themselves “Stevie and John”. They played on street corners and the occasional party or school dance. Somehow “Stevie” released his first album at age 12 and began attending a specific school for blind children around the same time.

Going by “Little Stevie” at a young age, a producer with Motown Records started calling him Little Stevie Wonder and his stage name was born. Since he was so young, the label drew up a contract in which royalties would go into a trust until Stevie turned 21. He dropped out of school, was given a weekly salary and a private tutor while on tour. There is a lot more to the story, but I’m fixated on Stevie’s adult work today, specifically his eighteenth (you read that right) studio album titled Songs In The Key Of Life that came out in September of 1976.

This was considered the “classic period” of Wonder’s discography when pretty much anything he released went platinum—so much so, the label backed Songs In the Key of Life being a double album, which was not particularly common at the time. The twenty-one tracks clock in at nearly two hours in length, a major detraction from albums of the ‘70s that were already clogged with 20-minute instrumentals. None of that deterred Stevie’s fans and subsequent sales, however, as the album is certified diamond and is likely somewhere around fifty million sold worldwide. And if that isn’t proof enough, it was No.1 on the Billboard 200 upon debut—only the third album to ever do that.

I’ve certainly discussed some well-reviewed albums here before, but this one might be the most unanimously favorable. I had to dig to find even one review that gave it an 8/10. It sits at No. 4 on Rolling Stone’s 500 greatest of all time, which is something to sit back and really think about. Out of every album ever created—of which there are billions—Stevie Wonder has the FOURTH best ever. It’s simply the highest praise you can bestow on an artist.

Elton John has suggested he never leaves the house without a copy of this record, saying it’s one of his favorites in history as well. Kanye West, who isn’t making music anywhere close to the style Stevie did, said he never felt pressure to compete against albums in modern culture—but that the bar is this album, and nothing else has ever stacked up against it. There are literally dozens more artists extending similar sentiments. The respect and admiration for this record has done nothing but increase over the last fifty years.

I can’t and won’t begin to outline Stevie’s legacy in this final paragraph, since it wouldn’t do him justice. I’ll just say, this is a classic for a reason. Pick it up, dust it off, do whatever you need to do to consume this today. It is, in fact lovely, and it will knock you off your feet.

Baseball is back! Follow the season on TDS TV+
How do you spot a scam? The FTC says to listen to how someone tells you to pay