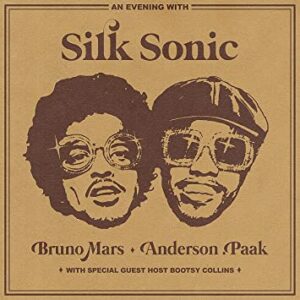 Pomp and circumstance have their place anywhere—even in music. While Grammy Awards don’t necessarily shape my own musical preferences, there is no debate winning one is a high honor for any artist and the ultimate sign of respect and acknowledgment. Last night, arguably the biggest winner was a band called Silk Sonic.

Never heard of them? Don’t feel bad, I hadn’t either until this morning but it turns out that Silk Sonic is an R&B super duo composed of singers Bruno Mars and Anderson .Paak. The two met in 2017 when Anderson was opening for Mars on the European leg of his 24k Magic World Tour. They got together in famous Abbey Road Studios in London to collaborate on another artist’s album and felt some chemistry. Mars ended up contributing to Anderson’s album, and they created a “band” in 2017 as a joke while working on the road. That joke turned legit in 2021 when Mars announced they were locked into making an album and they were going by the name Silk Sonic. Icon Bootsy Collins named the band after he heard the album, seemingly as an homage to how smooth their sound is but with a modern twist. Their R&B can be ‘60s butter at times, but on other tracks, they’ll mix in some fresh beats or rap—giving them a bit of an edge.

The idea was to do sort of a concept album where you’d experience the duo like you were hearing them in person and also have a host—almost like an old school talk show. On November 12 of last year, An Evening With Silk Sonic was released with Collins acting as the special guest host of the album. The cover art is a total throwback, with a retro sketch of the two singers’ heads floating on a solid background. The goal was for each song to have a theme and a sound that would engage the listener. Mars focused on the chorus to hook you in and .Paak created the vibe. The influences for the album were Aretha Franklin, James Brown, Miles Davis, and Stevie Wonder—with the two singers bonding over their adoration for that classic soul sound. Ultimately COVID and other major issues happening in the country today, were the impetus behind putting the album out. Mars noted, “a good song can bring people together… so that was our mindset with the whole album. If it makes us feel good, and resonates with us, that’s gonna be infectious and make other people feel good.”

Going from never hearing about this to diving in today, I can see why the album and band was so well represented at the Grammy award show last night. Mars is obviously incredibly talented as a singer and songwriter, that comes through here as well. .Paak adds a different kind of swagger compared to Mars’ solo work, which is a nice change of pace. Critics agreed, praising their chemistry together proving they could push each other to become something where the sum is somehow greater than the parts individually. Each track is lush with hooks and harmonies, and it almost listens like it’s a private conversation between you and them. While I can’t say I listened to a lot of ‘70s soul in my life, it definitely has that feel to it. A soul album that’s modern day—but your parents and grandparents could listen to as well.

It debuted at No. 2 on the Billboard 200, sold 104k copies the first week, and has had millions of streams so the album was already on its way. But, after hauling in Record of the Year, Song of the Year, Best R&B Performance and Best R&B Song—I suspect the world is going to get even more familiar with Silk Sonic. Happy Tuesday!