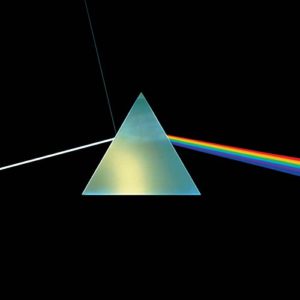 Cheap Tunes Tuesday: Pink Floyd, Dark Side of the Moon

Unfortunately, there has been too much loss in the music world recently. With everything going on, sometimes it’s a good thing to reset and go back to an album or an artist that just feels comfortable. Today’s featured album is on my personal top 10 and, coincidentally, is one of the best-selling records in history.

A couple years ago I first introduced a psychedelic rock band from England called Pink Floyd on the blog. While I detailed a different album, even in that post I mentioned to perhaps one of the most well-known efforts in music history—the famed Dark Side Of The Moon.

Released in March of 1973, this may be the very definition of a concept album. It was a glaring departure from Pink Floyd’s previous albums, omitting the extended instrumentals that had been a staple. It also dove into more intricate subject matter, focusing on greed, time, death and mental health. The latter partly because of the deteriorating health of founding member Syd Barrett who had left the group a few years prior.

Some may think the album title has an astronomy background, but in fact it’s an allusion to lunacy. The album cover, a prism spectrum, was farmed out and the only request was a “simple and bold” design. Mission accomplished, and it has undoubtedly become one of the most iconic covers in history.

The album was recorded in only two sessions at Abbey Road Studios in London. Alan Parsons was assigned as the engineer, and he and Roger Waters had a very theoretical vision regarding the atmospheric sound. Synthesizers were commonly used by the band and others at that time, but this album was the first they’d use multiple versions and brands. So many things were created, like a specially treated bass drum to produce the signature “heartbeat” effect on various tracks. Waters himself recorded clinking coins, tearing paper, ringing a cash register, and running a manual adding machine for the effects opening the track “Money”.

It was those types of details that put the album in a different category – something no one had ever heard before. There are stories of the initial rough edit of the album being played for people and they were so moved, they wound up in tears. It was at that point, everyone felt they knew they truly had something.

Dark Side catapulted all the way up to no. 1 on the Billboard 200 and has charted for over 900 weeks in total since its release. Every year to this day the album sells nearly a million copies and is sitting at fifty million sold worldwide. Critically, the album was immediately accepted as a masterpiece—and today, the acclaim is unprecedented. It’s on virtually every ‘best of’ or ‘top’ list created by any source, and has a spot in the Library of Congress, deeming it culturally, historically, and aesthetically significant.

Thousands of acts have covered the album and the songs within for fifty years. On top of that, samples have been used in tracks ranging in genre from country to hip-hop. Devotees have even gone to the depths of synching it up with the 1939 film The Wizard of Oz—which results in many amusing timing coincidences. Everyone connected to the album however has stated clearly, no one discussed the film during the album creation.

During these times when you’re likely cooped up in your house, only leaving for the essentials, music can really be a reminder of whatever “normal” means. And tossing on absolute classics like Dark Side can be a great distraction from the outside world. I didn’t really scratch the surface of all the fun stories and facts about the album, but it’s great, and you should listen to it again today. Happy Tuesday everyone, and I’ll see you on the dark side of the moon.