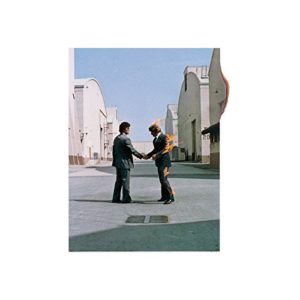 There’s a band out there, formed in the mid-1960s, that even now still sells millions of albums each year. In the 50+ year span, nearly three hundred million have sold worldwide. Just crazy numbers. I’m so excited that an album of theirs is cheap enough today to highlight, as they’re in my personal top 10 of all-time.

Roger Waters and Nick Mason met while studying architecture at London Polytechnic. After forming a sextet, the band played private shows around London, but nothing serious. A year later, half the band left, and Waters childhood friend Syd Barrett joined. After more band attrition, they found a different sound—moving to more R&B. Barrett wanted a new name and, spur of the moment, he looked at his record collection and saw Pink Anderson and Floyd Council. Out of his mouth came the Pink Floyd Sound—later shortened to simply Pink Floyd.

After generating a cult following, the band began attracting attention. Signing with EMI they began recording records, with their debut coming in 1967. Seeing modest success, the band brought in guitarist David Gilmour for some extra pop. This was a move that would potentially provide success, but because of toxic relationships between bandmates, Barrett was forced out.

Skipping ahead a bit, the band released The Dark Side Of The Moon in 1973. With that release, their entire trajectory changed. One of the highest selling albums of all-time, it put Pink Floyd on the permanent Mount Rushmore of music icons. After an extensive tour, the band returned to the studio to work on a highly anticipated follow up. Wish You Were Here was released in September of 1975.

Consisting of songs written while on their tour, the album didn’t require a ton of new writing. The songs are simple—they’re either tributes to Barrett (whose mental health was continuing to fail) or a critique and criticism of the music industry. Wish You Were Here only has five songs and runs about 45 minutes.

Reception was dazzling—the album went straight to number one and sold a quarter million in presales and a million in the first week of its release. It’s #211 on the 500 Greatest by Rolling Stone and the 34th best album all-time by Q magazine. The largest German radio station WDR 2 called it the best album in music history. Even Pink Floyd members Richard Wright and Gilmour refer to it as their favorite album they recorded. Sales to date are north of 20 million worldwide.

Where do you even start with such a classic? Pink Floyd’s music is legendary simply because there is and was nothing else like it. It’s this crazy blend of progressive rock, experimental synth and blues with what some refer to as “art rock” mixed in. Because of the lengthy solos, intros and outros, the music may not be for everyone—but those that enjoy that sound, the band is typically toward the top of lists. Even the cover art, the image of a man set on fire while shaking hands with another man—it’s simply iconic. There’s a whole story behind that too, which you should read up on some day (but yes, the man was REALLY set on fire for the photo). You would never know that the band was truly at odds during this time, arguing constantly over creative direction and the band generally growing apathetic toward the business. No matter, the end result was a complete masterpiece.

I could go on talking about this album and the band for days—but this isn’t the time or place. For the Pink Floyd fans out there, put Wish You Were Here on again today. If this is new to you, I can promise it’s worth your hard-earned $7.99. The band is just fantastic and that’s really what I think! (oh by the way, which one’s Pink??)

Pink Floyd, Wish You Were Here

Summer blockbusters arrive on TDS TV on Demand
Pop quiz: How much Video on Demand does TDS TV offer?