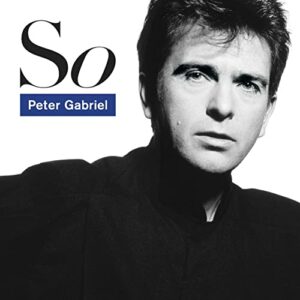 By Austin Krueger on September 14, 2021 in Online Life

If at first you don’t succeed, as the old adage indicates, sometimes the first go-round simply doesn’t work out as planned. Many artists have made it big after a first failed attempt, like today’s featured act, for example. This person is one of the more underrated artists in history, I’m excited to listen to more today.

Peter Brian Gabriel was born in February of 1950 in Surrey, England. He dad was an electrical engineer, but his mom came from a musical background—it seems like her entire family was in the business in some fashion or another. Peter’s great-great-great-uncle was also Lord Mayor of London from 1866-1877, so between those two things, he seemed destined for success. While he attended preparatory school, his teachers noticed some true vocal talent, but Peter opted to take piano lessons from his mom and started drumming as well. At age 10, he got a floor tom-tom to whale on. He was influenced by hymns and Peter wrote his first song at age 12. His aunt gave him money for vocal lessons, but he used it to buy the Beatles first album instead.

Gabriel got his first taste of being in a band with a traditional jazz outfit called M’Lords where he was the lead singer and drummer. In 1965 he formed Garden Wall with some old school friends where he developed a flair for performing—during their last show, he showered the audience in petals he’d picked from neighboring gardens. In 1967, Gabriel  became part of this small band called Genesis. They’d go on to sell seemingly billions of albums, but Peter’s time in the group was fairly short lived. His reign ended in 1975 with then no-name drummer Phil Collins taking his spot at lead vocal. Obviously, that worked out for Genesis, but what happened to poor Pete?

Gabriel started by putting out four albums from 1977-1982 all without titles—just being called by the images on the album covers. The albums were all solid, with the debut spawning the well-known track “Solsbury Hill”, but he wasn’t quite making the noise he wanted. Enter May of 1986 and his fifth studio album titled So. The title was a sarcastic commentary aimed at the label for asking him to actually name his music so they could properly market it. Did it work? Well five commercially released singles, multi-platinum sales in several countries (roughly 10 million sold worldwide to date) and a Grammy nomination for Album of the Year would all seem to say yes. Rolling Stone has three times felt it was part of the 500 greatest albums of all time as well, so it seemed this one put Gabriel on the map.

From a style perspective, boy—what does this album not have? It’s this blend of pop and rock, but done artistically with the progressive use of synthesizers and somehow, feeling like it captured music from all parts of the world. The New York Times was quoted in saying, “only a handful of Western rock musicians have managed to use exotic rhythms and instruments with much ingenuity and conviction.” That’s pretty apt—the album is incredibly complex and powerful. Likely unlike anything heard on the pop standards charts at the time. Popular tracks like “Sledgehammer” make you immediately know it’s from the U.S. ‘80s culture, but the rest of the record seems to span all time and existence. Unanimously it transformed Gabriel into an iconic artist instead of a cult hero. It influenced so many modern artists and provided an outlet for a sound that many groups wanted to emulate but wouldn’t have felt empowered to until he made it accepted.

Peter’s most recent work was a cover of the Beatles “Strawberry Fields Forever”, not having put out a record since 2011. Word is he still tours occasionally, and sadly he’s one I’ve never seen in person. Maybe one day—and hopefully soon since he’s 71 years old. Until then, I’m going to cherish this record and you should too. Without a noise, without my pride, I reach out from the inside. Happy Tuesday!