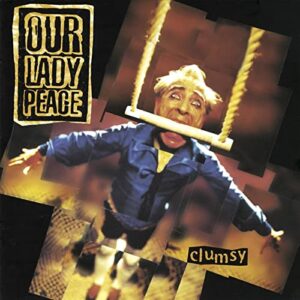 Living in the U.S., we tend to focus and listen mostly to music that originates and is popular here. That said, it’s not uncommon for acts to hit it big here when they also start to make noise in their respective places or origin—we’re in a global economy after all. Today’s featured act had a stint of success here, but they’re huge in their own country.

Toward the end of 1991, Mike Turner placed an ad in a Toronto newspaper in search of musicians. Vocalist Michael Maida was studying criminology at University of Toronto and replied first. The duo started calling themselves As If, but kept looking for more members. They did add to the group and played a few shows, but nothing caught fire. In early 1992, they changed their name to Our Lady Peace, after a poem of the same name by Mark Van Doren. With some encouragement, the group started playing shows in Ontario and Montreal with another band—and also during that time, Maida started using the name Raine instead of Michael. Our Lady Peace (OLP) made a few music videos and they made some roster changes. Sony Music Canada signed the band in April of 1993, their lineup was formalized, and they were on their way to commercial releases. The debut dropped in March of 1994 and did really well in Canada—going 4x platinum.

As a trial of sorts, one single was leaked into the U.S. and OLP was given a chance to tour with the likes of Van Halen and on the infamous Page/Plant tour. The results were positive and one of their singles was used in blockbuster film “Armageddon”—they even started to open for Alanis Morissette, who was huge at the time. They signed an American deal with Columbia Records and they immediately hit the studio for album number two. Clumsy hit shelves in January of 1997 and lead single “Superman’s Dead” was given to all the major radio stations to get the word out a week in advance.

The promotional move wasn’t needed with our neighbors to the north, as it debuted at No. 1 in Canada and would end up getting certified platinum there within a couple years. In the states, the sales were solid too—but it would take seven years for the album to sell a million copies. In 2007, Clumsy was labeled the 76th best album to ever come from Canada and received various other acclaim. While the album overall peaked at No. 76 here, the lead single is still in constant rotation today across rock radio no matter where you listen—showing a staying power some thought the band wouldn’t have.

Critically the album was considered above average or great by pretty much all reviewers—so there is a reason it’s their best-selling album of all time. Raine’s vocal is really highlighted here, and since he did most of the writing and thematic creation of the album, the passion really shows in his performance. You can tell the band took some key notes from artists they worked with like Van Halen, enhancing their basslines, and understanding getting the toes-tapping is just as important as the listener singing along. The album, start to finish, feels incredibly authentic—which is rare for music in the late ‘90s. At that time, especially rock or alt rock, lots of groups were trying to be like other bands that sold millions upon millions. It feels very post-grunge, and not that OLP invented that genre, but with this album they certainly proved they belonged in it.

It’s been a whirlwind for the group since. Many more lineup changes, a change in sound and a hiatus, but they’re still out there making music today. A loyal, weekly reader requested this band today, so I’ll be curious if the new stuff is as good as the old, and if so, I’ll be excited to dig into it further. Until then, we’ll just laugh instead. Happy Tuesday!