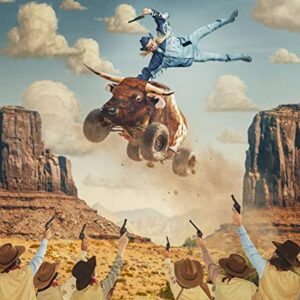 If I’ve said it once, I’ve said it a thousand times now: I love requests—especially when it’s music I’m not familiar with. It’s like when a new burger joint opens up in town and you kind of want to try it—but if someone you trust went first and tells you how amazing it is, you’re definitely interested. Today’s requested feature is someone I’ve never heard of before, so I’m looking forward to diving in!

Oliver Tree Nickell was born on June 29, 1993. He was born and raised in Santa Cruz, California, where he took piano lessons at just three years old. He wrote his first song at age four and had an entire album under his belt by age six. Around high school age, he joined a ska band called Irony which gave Oliver his first experience performing in front of live audiences. He started to take interest in hip hop and electronic music, becoming a DJ and recording with a group whose name would be censored on this site. He started going by the pseudonym “Kryph” and producing dubstep for a period of time around 2011. When that was his focus, he opened for acts like Tyler, the Creator and Frank Ocean—occasionally going by the new pseudonym Tree. By age 18 he was signed with R&S Records out of London and released an EP. The EP gained major traction when Radiohead lead Thom Yorke approved of Tree’s cover of their smash hit single “Karma Police”.

As his career was progressing, Oliver decided to use only his first and middle name professionally. He took a brief hiatus to study music technology at California Institute of the Arts but returned to music officially in 2016 performing on Last Call with Carson Daly. After another EP in 2018 and several music festivals under his belt, the first commercial album release came out in 2020. The album peaked at No.14 on the Billboard 200 and spawned five singles. With that came some hype for his sophomore follow up titled Cowboy Tears, which released just 11 days ago.

The lead single “Cowboy’s Don’t Cry” was leaked on January 12 of this year, with a video starring actress Bella Thorne. Since then, two more singles have been released and the album appears to be gaining some real traction. Since it’s so new, there isn’t a whole lot of other information out on the record. Critics haven’t weighed in yet, but I’d be genuinely curious they feel about albums like this. In my opinion this very much feels like a modern take on pop that guys who reviewed Zeppelin likely wouldn’t get.

From what I’ve heard so far, there are things to like about Tree’s style. It seems pretty clear he does all the vocals, arrangements, and some mixing—it has almost a Billie Eilish feel to it. There is a quality to those homegrown albums that resonates with me. In terms of genre, it’s hard to pinpoint exactly what this is. Although my finger isn’t on the pulse of modern pop music, to me it feels poppy with a little electronic and rock mixed in (I’ve even seen this labeled as country, which I really don’t understand). It’s not your grandfather’s dubstep from his DJing days, that’s for sure. Lyrically, it’s certainly not the most sophisticated record I’ve ever listened to, but I wasn’t expecting it to be. It gets my toes tapping, and I could see singing along to a few tunes in the car, and hey, isn’t that was pop music is for?

Be bold and try something new today. Oliver Tree might just be in your wheelhouse of modern music, and like me, you’d have never known it! Happy Tuesday!