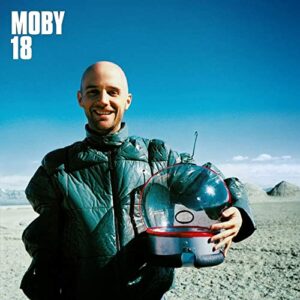 Think about your favorite movie of all time. I’m sure you can recite almost every line, know every character’s name, and could outline the plot to anyone interested in watching. But can you also name all the music utilized in it? Songs can help define a film and give it that extra boost it needs to resonate with fans. Today’s featured artist knows a thing or two about soundtrack work and contributed to a series of films that were extremely popular.

Four years ago, I talked about the exploits of an artist named Moby, and one of my favorite albums of all-time. Those that know me are aware I’m a bit of a movie buff in addition to my music habits. I have no idea why, but somehow over the last twenty years I never saw any of the Bourne series of movies starring Matt Damon (and one time Jeremy Renner). I finally put on the first movie a few weeks back and was hooked. I’m caught up on the entire series except for the most recent film, but I’m excited to put that one on too. Imagine my surprise after two hours of espionage and revenge, Moby’s ‘Extreme Ways’ blares and the credits roll. Imagine my greater surprise when each movie ends the exact same way. Not only do I enjoy movies, but I’m a fan of Moby’s work. How could I have been so left in the dark?

What I was not in the dark about, however, was Moby’s sixth release titled 18 which hit shelves in May of 2002. Released almost three years to the day after his previous album Play, hopes were pretty high given that record’s astonishing success. He was coming off a 21 consecutive-month tour and immediately hit the studio. Moby didn’t care about reaching the same commercial success, but had an “artistic pressure” that he make a record that he and others truly enjoyed. He tasked his pals to scour local record shops around the U.S. to find albums with strong vocals for sampling purposes. He’d get short vocal clips and start playing various chords on his piano he felt aligned. After ten months, Moby had 35 compact discs comprising over 140 songs. He briefly considering using all of them to make a triple album release—but thankfully, pretty much everyone in his life talked him out of it. He edited it down to his favorite eighteen tracks, hence the album title.

Critically, the album found positive reviews pretty much across the board. They heard it to be similar to Play but as one reviewer noted, “Moby not only creates a shimmering, reflective mood from the outset, but he sustains it throughout the entire 18 songs, as the album shifts from pop to soul to soaring instrumentals.” Long-winded, but spot on.

The album transcends time and space. It goes from sad and introspective to pop—and back again—several times. It’s an album that makes you feel things and want to talk about with your closest friends. Then you get the track “Extreme Ways” used in the Bourne series at track nine. The open of it provides a great folly for the movie to close, typically ending on some sort of cliffhanger. And that’s what Moby does maybe better than anyone. Are they songs you want to sing along with? Maybe not. But they capture a mood and a tone, no matter what it is. And his work provides a soundtrack of sorts not only to media, but to your life. To that point, the song titled ‘18’ off this album is my alarm clock wake up tone.

I could go on and on about this and Moby for hours. He truly doesn’t get the artistic respect I feel he deserves, so I’m happy to promote him again today. I’m also thankful the universe brought me back to this album because, while I owned it and wore it out in 2002, I got a chance do that again twenty years later. I would stand in line for that; there’s always room in life for that. Happy Tuesday!

Love is in the air: Valentine’s Day movies for everyone and anyone
Abraham Lincoln premieres on The History Channel on Feb. 20