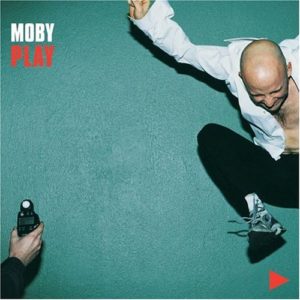 As we’ve discussed before on the blog, the music that becomes popular isn’t always what you’d expect it to be. Pop radio is a fickle beast—one day it’s alt rock and the next it’s country. But surely, ambient electronica could never become popular, right? Let’s find out!

Richard Melville Hall was born in Manhattan in 1965. Expecting to be raised in Harlem, mom was a medical secretary and dad was a chemistry professor who passed away when Richard was only two. Upon his death, the family moved to Connecticut to avoid the stress of the city. In his late teen years, Richard played guitar for a hardcore punk band and then an alternative rock group. He appeared in a music video in 1989, but neither Richard nor the band made any waves.

Looking for a new start, he turned to an old childhood nickname. Due to a supposed ancestral relationship to Moby Dick author Herman Melville, his mom called him Moby as a youth. He decided to run solo and adopt that as his stage name. A first solo performance was riddled with technical issues and mishaps, but somehow left fans more intrigued and impressed by this newfangled sound. He would create a single “Go” in 1991 that generated some buzz, but nothing to really get noticed by the mainstream.

Four albums into his discography and suddenly it’s 1996. Elektra Records was getting fed up with the lack of sales and spurred Moby to go other directions creatively. Finding a new deal and being incredibly motivated, he sat in his home studio and intended to make his best (and final) album.

Play was released in May of 1999 and sales were initially slow. Since Moby was now with a smaller label there wasn’t as much pressure—but his manager sent copies to all the critics and the last conversation they had was, “If we can sell 250,000 copies, that would be amazing.” To help make it happen, they tried out a new strategy. Due to the ambient nature of some of the tracks, they licensed them out to various films, television shows and commercials. The plan worked and some of those evocative, emotional tracks began seeing time on radio and MTV.

Moby literally played his first show to promote the album in a Virgin Megastore basement, but in 2000 he was leading the MTV Campus Invasion tour. The mega-success of the single “South Side,” a collaboration between Moby and lead singer icon Gwen Stefani from No Doubt, would put the album over the top. To date, it has sold nearly 15 million albums worldwide after essentially none the first twelve months.

Sometimes when an album comes out that’s so different from the mainstream, critics react positively to it, in spite of it being a musical dud. This couldn’t be further from the truth with Play. After being nominated for a Grammy Award, it sits at 340 on the 500 greatest of all time list by Rolling Stone and was voted the 63rd best album ever by industry pundits referred to as Channel 4.

Since Moby was labeled a techno guy, I think some people bought this anticipating a dance record but got home and found it was something so much more. It’s almost like if you could take the philosophy behind the film American Beauty and wrap the essence up into an album. A couple tracks go more up-tempo and beat-y, but I’m not sure that’s the appeal here. It’s the contemplative nature in which you find yourself listening to this, and what other albums really do that?

Moby had a solid follow up to this, but his ten subsequent albums never had the same mass appeal. He spends his days mostly doing soundtracks and working with other artists nowadays, but Play has really stood the test of time. Your heart won’t feel back when you throw this on today, and you may just find that it becomes your weakness.

We’re popping up all over!
Creative meals to make over the campfire