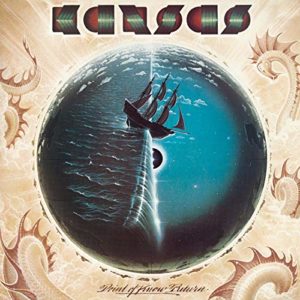 When you think back to some classic acts—sure, you might know their names, but you also might think of them as maybe second tier or not as popular as they were. Today’s featured act has a handful of radio standards, but for some reason never seems to be talked about with the major groups of their time. Somehow in spite of that, they’ve sold over 30 million albums worldwide.

In 1969 Don Dontre and Kerry Livgren were performing in a local band called the Reasons Why out of Topeka, Kansas. After dumping that band and joining up with a few others guys, they began forming a new sound. In 1970, they changed their name to Kansas and merged with members of a rival Topeka progressive rock group called White Clover. The new group had eight members coming from the two factions. This iteration of the band lasted until 1971, when some left to reform White Clover, leaving the others to remain Kansas 1. Kansas 1 made tweaks to their lineup and were being called Kansas 2. Meanwhile the drummer from Kansas 2 left to England to look for other musicians, got back in 1972 and once again reformed the band calling it White Clover. In ’73 he contacted some of the old White Clover guys and the old Kansas 2 guys, and reached out to a small label citing all this back and forth as ‘perfecting the sound.’ It worked, they began calling themselves Kansas again and finally (I think) the band was on their way. Confused? Me too.

Kansas dropped their first record in 1974 which defined their sound. They had this American boogie rock style, but incredibly complex, almost symphonic arrangements. Their style was liked, but the album never really created the hits anyone was hoping for. That all changed in 1976 with the single “Carry On Wayward Son,” driving radio play, sales, and name recognition.

Today I’m listening to their highly anticipated follow up, Point Of Know Return which was released in October of 1976. The title track hit the charts in early ’77 and the album catapulted on the charts. It went all the way up to #4 on the Billboard 200 and the album was certified platinum in under a year. Critically, Kansas was praised for shortening their songs, making them more radio friendly, but many considered the lyrics to be derivative of their older works. Some also felt the prog rock days were over and that the album would never truly be remembered. Turns out they were all fairly wrong since the album has sold nearly 10 million worldwide to date, and has been cited across movies/commercials over the last four decades.

You’d almost have to have been isolated from music in the last forty years to not have heard a classic like “Dust In The Wind.” A track like that was such a departure on the album and in the catalog of a band like Kansas, it really sticks out. The minimalist style is also very unique and gives the tune longevity even today. The guitar line was written while one member was simply randomly fingerpicking in the studio and they were encouraged to write lyrics around it.

Admittedly, this type of pageantry rock can get a little over the top and even this album goes from rock to opera at times—but start to finish Point of Know Return is pretty well done. They mix up the arrangements enough over the course of 10 songs that you don’t find yourself getting too fixated on one genre or sound. They didn’t win any Grammy Awards or anything like that, but it’s just flat out good, iconic music—and that’s really all that matters.

Kansas is still out there, doing their thing. They’ve gone through what seems to be fifty members if you include those early days, but two of the originals are still touring. They released an album back in 2016, which received relatively favorable reviews; I may have to dig into that next. Until then, toss on this gem from the ‘70s today and jam away. You might think it’s just the same old song, just a drop of water in an endless sea—and that may be true, but for $4.99, this isn’t just dust in the wind.

TDS employees select charities for donations in the company’s golden year
Shop at home with HSN, JTV, and QVC