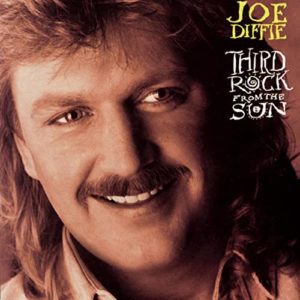 Unlike last week’s widely popular artist, occasionally musicians aren’t well known across the industry—but are very popular and respected within a particular genre. Today’s featured act seems to be a country music staple but is likely someone most people haven’t heard much of. This post is dedicated to the memory of Joe Diffie 1958-2020.

Diffie was born into a musical family in 1958. Growing up in Tulsa, Oklahoma, his first musical performance came at age 14 when he took stage with his aunt’s country band. His father played guitar and banjo and his mom was a singer. At an early age, he followed more in his mother’s path, often singing along with his father’s record collection. His parents would tell him later in life that he was able to harmonize with the records when he was just three years old.

Diffie and his family would move around the country—first to San Antonio, then to Washington state, and then Wisconsin. He’d finally return to Oklahoma for the latter half of high school and participate in football, baseball, golf and ran track. His senior year he was recognized as ‘Best All-Around Male Athlete’. He went to college but dropped out after getting married. He began working in a foundry and built a recording studio because music was always in the background. When the foundry closed in 1986, he sold the studio and got a divorce, with his ex-wife taking the kids.

After battling depression for several months, Diffie decided to move to Nashville. He took a job at Gibson Guitar Corporation and while he was there, met a songwriter and began recording demos. By ’89, he quit the day job and stuck to music. Epic Records signed Diffie, and other country acts were using his songs—things were looking up. His debut released in 1990, but today I’m listening to Third Rock From The Sun, released in July of 1994.

Unlike previous albums, this effort was co-produced by Diffie, something he’d always felt he had an ear for—and he was right. Success was quick—the first five tracks were all released as commercial singles and charted on Billboard Hot Country Songs. It would go on to be his highest-achieving album as well, hitting no. 6 on the 200 charts, and selling nearly five million albums worldwide to date. Down the road in 2005, Applebee’s restaurant chain would even repurpose his single “Pickup Man” for use in their television ads. Critically the album was well received, with most praising Diffie’s range and adding a bit more rock and up-tempo elements.

Diffie isn’t necessarily a new name for me, but I’d only heard a handful of his tracks in the past. One thing that struck me immediately listening to his material is the vocal. Diffie clearly had the signature country twang, but when he needed to show his range, he did. The album is a bit ballad heavy, which makes sense because his talent was built for them. And for a country artist many of you maybe aren’t as familiar with, Joe made one heck of a nice career for himself. Thirteen studio albums, six compilation records and nearly 40 singles. He sold tens of millions of albums over his career and was featured throughout all sorts of different pop culture media. He was even nominated for two Grammy Awards, winning one in 1998 for Best Country Collaboration with Vocals.

Joe was married four times in his life, and has a handful of children. His fourth child was born with Down syndrome and for twenty years Diffie held a charity golf tournament benefitting mentally and physically impaired children. His final marriage was just a couple years ago, in May of 2018. Unfortunately, on March 27 of this year, Diffie announced he tested positive for coronavirus and only two days later, he passed from complications relating to COVID-19. This one is in honor of Joe Diffie—RIP.

Eleven online resources to stay active at home
Want to get your Coronavirus relief check? Scammers do too.