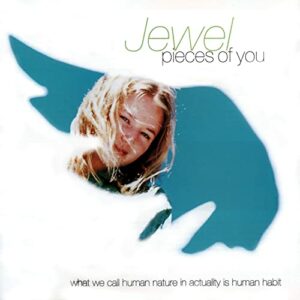 You hear a lot about the advantages of being born into the music business or having family that can get your foot in the door. While that strategy is undeniable, today’s featured act is the polar opposite. And by polar, I mean raised in the arctic. Let’s find out if that impacted this artist’s success.

Jewel Kilcher was born in May of 1974 in Payson, Utah. She was the second child born to parents who were living in Utah while her dad attended Brigham Young University. Shortly after her birth, the family moved back to Anchorage, Alaska where her dad was originally from, and live on the family’s 770-acre plot of land.

After her parents divorced in 1981, Jewel moved with her father to Homer, Alaska to a house that had no indoor plumbing—only a simple outhouse. They had no running water or heat, just a coal stove to fight off the harsh elements. Jewel and her dad would make a living by sometimes performing music in roadhouses and taverns, with Jewel learning to yodel at a young age. At fifteen, she applied to Interlochen Arts Academy in Michigan and received a partial scholarship to study operatic voice. She raised $11,000 from local businesses in Homer to help cover the rest. There Jewel would learn guitar and hone her vocal skills—while beginning to write for the first time as well.

In the early ‘90s, Jewel lived out of her car driving around the country doing street performances. A friend, with a connection to Atlantic Records, implored the label to come down to see Jewel perform at a coffee shop. At the time, Jewel was living in a van and had no money to record a demo. What they heard impressed them.

At 21, Jewel released her debut album titled Pieces Of You which hit shelves in 1995. Much of it was recorded at Neil Young’s ranch and utilized his backup band for the record. Other tracks were recorded live at the coffee shop in San Diego where she was discovered. It would debut on the Billboard 200 and peak at No. 4, while staying on that same chart for two straight years. Sales year to date have hit nearly twenty million worldwide, with it approaching fifteen million in the USA. With those kinds of numbers, it’s one of the best-selling debut albums in music history.

This is one of those albums that people didn’t pay much attention to in the beginning but is now considered an iconic album from the decade. Not knowing who Jewel was, many critics were quick to dismiss her—but once she got the backing of legends like Bob Dylan and a couple singles caught fire, everyone was firmly on the bandwagon. You can hear Jewel’s potential as a singer/songwriter on this debut, and if you didn’t feel this was her best effort, it was a great start at what could become an amazing career as a modern folk singer.

As it turns out, this would be Jewel’s most successful record by a fairly significant margin. She would begin to tinker with her sound after a couple less popular releases, digging into dance music and going through multiple experimental phases. No need to feel sorry for her though—she’s made a living with art and writing while still putting out music and getting decent gigs all over the world.

Jewel seems to be one of those names everyone knows, but maybe one you haven’t gone back to in a while. I think the album holds up well over the decades, especially if you’re in the mood for that laid back, indie coffee shop type show. Her vocal abilities are second to none, and that yodeling background makes her easily identifiable on the radio. Give Pieces Of You another go today—I’m not sure if it’ll save your soul, but it’ll prevent other you from other foolish games. Happy Tuesday!