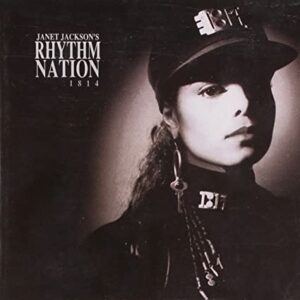 Even though today’s featured act qualifies without question as an icon or iconic artist, there is a cloud that hangs over her career. I learned a lot more about it recently after watching a new, heavily marketed documentary—and when I noted she hadn’t been covered yet on the blog, it was an error that needed to be corrected immediately.

Janet Damita Jo Jackson was born on May 16, 1966 in Gary, Indiana. (You’re probably not at all familiar with her family, right?) Janet was the youngest of all the 10 Jackson children. They were a group of Jehovah’s Witnesses who ultimately wanted more out of life. Janet’s brothers started the Jackson 5 and after landing a hit, the whole family moved to Los Angeles. It’s safe to say that, after that trek across the country, the family focused on the children who were most talented in singing and acting. Janet scored a role on the sitcom Good Times in 1977. As she grew, she continued to focus on acting, with only some knowing how talented she was vocally as well. A musical television program called Fame wanted Janet to join the program for its fourth season. Even though she was indifferent about the show, it gave her a chance to show off being more than an actress. Her time on the show didn’t go well, but it did expose her to music producers, leading to a deal with A&M Records.

Janet employed her father as manager, and he oversaw the recording/release of her first two albums. Due to family strains and underperforming sales, Janet decided to sever the ties between her dad and her career. After doing so, Janet released her most successful album to that point in her career: Control, in 1986. It has sold well over 10 million copies worldwide, and many felt Janet’s career was at its apex. Little did they know, Janet was cooking up a concept album focused on addressing social issues and collaborating with several producers. Fast forward to September of 1989, and Rhythm Nation 1814 hit shelves.

The title came about when Janet herself uttered the sentence, “I thought it would be great if we could create our own nation, one that would have a positive message and that everyone would be free to join.” The usage of 1814 represents the year the national anthem “The Star-Spangled Banner” was written. To say the concept worked might be the biggest understatement I’ve ever typed. She’s sold over twenty million copies, and it cemented her legacy as an icon and a role model for youth all over the world.

Most people are likely familiar with this album, or at least a few tracks on it. But the background of Janet’s story and life were simply mesmerizing. I caught the documentary simply titled Janet Jackson that first aired on A&E and Lifetime networks a couple months ago. Her story is pretty amazing, and I would recommend watching it, but it’s way too much to put in this blog post. Her career is filled with fantastic performances, high-selling albums, and dance moves that have been studied and copied by dozens of performers. Despite her success, Janet could never fully escape the drama of her family and her brother however. They have been a dark cloud that seemed to follow her no matter where she took the stage—a cloud that only grew when Michael faced accusations of molestation and other bizarre activities at his ranch. Janet only wanted to be a good sister and known as a great musician.

This is considered a five-star album pretty much across the board. Sure, some fussed over it upon initial release because of the “controversial” nature of the lyrical content, but by today’s standards, this album wouldn’t even remotely trigger any reaction. Despite her own reluctance to be front and center on her personal life, the family drama, and the crazy controversy about that Super Bowl performance—Janet is still revered in the industry. Her legacy lives on with her induction into the Rock and Roll Hall of Fame in 2015. We really are a part of the rhythm nation!

*Usually I can find links to a preview of the individual songs, but this week, pull the album up on your favorite streaming service and definitely don’t miss these three!