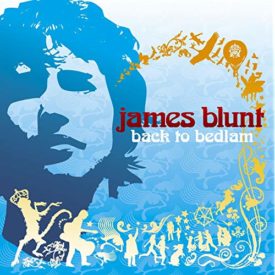 Hard to believe, but Cheap Tunes Tuesday has been a staple on the TDS blog for six years! Since I’ve been doing it so long, I’ve completely lost track of artists I’ve blogged about and those I haven’t. In rare occasion, I hear a song and assume I’ve covered the record, but I actually haven’t. Today is one of those instances, so let’s hear it!

James Hiller Blount was born in February of 1974 at an army hospital in Tidworth, U.K. The first of three kids, his dad was a colonel in the Army Air Corps and mom started a ski chalet company in the French Alps. The Blount family military legacy goes all the way back to 10th century. Being a military kid, James moved around quite a bit—essentially moving every two years. He was a very smart kid, getting A’s in most classes including all the sciences. He wanted to be a pilot like his dad and got his fixed-winged private pilot license at age 16. James joined the military and served from 1996 until 2002. He stood guard at the coffin of the Queen Mother during her lying in state and was part of the funeral procession on April 9, 2002.

James had piano and violin lessons as a child and was also introduced to electric guitar at age 14 by a classmate. While in the military, James wrote songs during his off time. One of his backing vocalists and collaborators during that time knew Elton John’s manager and suggested James contact him. When he listened to Blunt’s demo in the car—the song happened to be future single “Goodbye My Lover”—he pulled over and called James immediately on his cell so he could set up a meeting.

Shortly after leaving the military, James was signed to EMI Records and he was on his way. His debut album Back To Bedlam was released in October of 2004. The album title came from the famous psychiatric institution Bethlem Royal Hospital, which is commonly known at Bedlam. It wasn’t an immediate hit. It would take until summer of 2005, but the album eventually exploded onto the scene and sold nearly three million copies in the U.K. By December of 2009, it had become the best-selling album in the U.K. in the 2000s. It has only been passed by Amy Winhouse’s Back To Black for any album sold in U.K. recorded in the 21st century. In terms of worldwide sales, it’s edging close to 20 million.

Critically, the album was almost universally loved. He was dubbed Britain’s soulful crooner—and his falsetto was something nearly all listeners would cite as the bright spot. An album of mostly seemingly very sincere ballads, it’s a great debut effort. To say it’s rare that a military man would come out with his voice and this writing/lyrical content might be one of the biggest understatements I’ve ever typed.

The album would catapult James into making appearances on The Oprah Winfrey Show and being the musical guest on SNL. Many of the tracks heard on the record were utilized on television and in ads, including immensely popular programs like The OC and Grey’s Anatomy. James performed at the 49th Grammy Awards in February of 2007, although he did not bring home a win despite being nominated five times. He even got a chance to tour with Jason Mraz, who may have been the biggest soft rock/folk rock act of the time.

I’ve not gotten myself acquainted with Blunt’s work after this album, but it’s one of the better debut efforts I’ve listened to recently. For that reason alone, it’s worth giving a shot today. James is a big philanthropist, raising funds for servicemen and better medical facilities in war-torn countries. Wise men have said you should listen to this today, and all I can say is thanks for taking the time to read today—you’re beautiful.

Black History Month 2020: African Americans and the Vote
How you got scammed in 2019