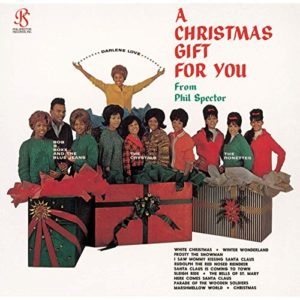 I’m not sure there would be much debate about the statement that I listen to a LOT of music. Spotify said I listened to over 40,000 minutes of music in 2019 a couple weeks ago. Yet, sometimes something crosses my desk that is totally foreign to me. Enter Rolling Stone’s list of the 25 greatest Christmas albums of all time. And #1, somehow, was never was even nearing my radar.

Harvey Phillip Spector was born the day after Christmas in 1939. Dad was a Ukrainian iron worker, who’d recently came to the states. When Harvey was only 10, his farther died by suicide leaving mom to find work and support the family. They moved to Los Angeles and she began working as a seamstress.

Having learned how to play the guitar, Harvey performed in a talent show in high school. His act was noticed by a loose-knit community of aspiring musicians—including some that would end up backing him on his first commercial record. Spector formed a group called the Teddy Bears, but caught a break when the co-owner of Gold Star Studios in Hollywood took notice of Harvey and began tutoring him in record production. In 1958, Spector penned a song for the group ultimately leading them to be signed by Era Records. The very next song he wrote was inspired by the epitaph on his father’s tombstone and would skyrocket to number one on the Billboard 200, and sell over a million copies as a single.

After the band disbanded in 1959, Spector’s career quickly transitioned into production. He would end up becoming so successful, he’d produce the Righteous Brothers “You’ve Lost That Lovin’ Feelin” and “Unchained Melody”. In the 1970s he’d even work with The Beatles, producing the smash record “Let It Be” and working with John Lennon on his solo work—but I’m getting ahead of myself here.

On November 22nd of 1963 Spector (now going by Phil) produced and released a holiday album titled A Christmas Gift For You From Phil Spector. It would feature predominantly the artists that were regulars of his during that time period. It would go on to peak at No. 13 on the charts, which was a shocking surprise, given the circumstances. History buffs may recollect, that’s the same day President John F. Kennedy was assassinated. Original pressings are so scare today, they sell for $500 in great condition. The album would go on to be reissued in 1972 by Apple Records. In the decades after the secondary release, the album has gone on to be considered a holiday classic and sets the standard for all other Christmas albums.

Simply put, I’m shocked by this album and how ignorant I was to it. Now, I don’t listen to a ton of Christmas music, even during the holidays—but every single song on this album is one I’ve heard a billion times. Any time I hear these standards in a movie or commercials, I had no idea they came off this record. If you’re a big fan of music during the 1960s, you likely know of a few of the vocalists here, but overall, it’s not necessarily a who’s who of iconic singers. If you can pick out the Ronettes from any other early female band, you have a much better ear than I do. Darlene Love’s rendition of “Christmas (Baby Please Come Home)” is beyond iconic, and again, had no idea it was from this record. Her emotion and passion in that particular track is unequivocally the best holiday song I’ve ever heard. And in terms of overall record, it’s No. 142 on Rolling Stone’s 500 greatest albums of all time, and featured in the infamous 1001 albums you must hear before you die. Extraordinarily high praise for a Christmas album.

Phil Spector was found guilty of murder in the second degree of actress Lana Clarkson in 2009 after a highly publicized mistrial and retrial. He married his third wife in 2006 and filed for divorce from prison in 2016. His health has steadily declined, in 2014 he lost his ability to speak due to a laryngeal problem. Personal issues aside, there is no denying his impact on the music business, including this iconic Christmas album. Give it a try today, I think like me, you’ll be shocked at how familiar it all sounds. Merry Christmas Eve!