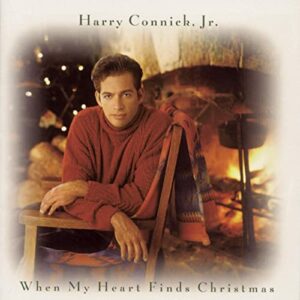 Before I get started this week—a special shoutout to loyal reader, Janis, who provided suggestions for this and last week’s holiday music entries. If it’s not clear, I love suggestions, especially when it’s music that isn’t in my wheelhouse. Today’s featured act is more popular than I can imagine and, in spite of his great talent for it, music might be the last thing you recognize him for.

Joseph Harry Fowler Connick Jr. was born and raised in New Orleans, Louisiana. Born in 1967, his mom was a judge, and his dad was the district attorney from 1973-2003. That background perhaps explains Joseph’s later role as Executive ADA David Haden on NBC’s legal drama Law & Order: Special Victims Unit—but where did the music influence derive? Turns out his parents also owned a record store where Joseph would be exposed to artists from all genres and styles. He learned to play keyboards at age three, even playing publicly at five. Joseph then joined, performed, and recorded tracks with a jazz band at age ten. Around the same time, he performed Beethoven’s Piano Concerto No. 3 Opus 37 with the New Orleans Symphony Orchestra. When it was clear he was going to have a future in some sort of performing business, he shortened the name to simply Harry Connick Jr.

Harry put out his first studio album in 1988 which was primarily an instrumental album of standards. It was well received enough that Rob Reiner reached out and asked him to provide the soundtrack for the 1989 romantic comedy When Harry Met Sally…. His second album came out in 1990 for which he took home a Grammy Award. After two more successful studio efforts, Harry decided to put down his first Christmas album. When My Heart Finds Christmas hit shelves in October of 1993. Spoiler alert: this album is one of, if not the most popular holiday album in the United States the last two decades. Listening today to understand why.

I think this holiday album’s popularity is partially due to the song mix. Harry composed four of the fourteen tracks and the remaining ten are all staples of holiday listening. They’re done in a way that’s not mind-blowingly unique, but they have his soulful, bluesy tone and composition to them. The album has sold over five million copies to date, so whatever the secret sauce is for folks, they like it. He’s done two more holiday albums since, both seeing similar success but not quite to the level of this one.

In addition to many more soundtracks to his credit, Harry got bit by the acting bug as well making his on-screen debut in 1990 for the film Memphis Belle. He won Golden Globe award in 1991, changed his musical style to New Orleans funk in the mid ‘90s, starred in the popular television show Will and Grace, starred on Broadway—and even appeared on American Idol several times. If you forced me to pick what people know him best for today, I truly couldn’t say. But when it comes to this music, this is my intro of sorts into his discography. Granted holiday tunes aren’t probably the best look into his true identity as an artist, but I can understand why he sells albums. His vocal is like crooner plus—because he has more range and is more dynamic than a lot of those ‘50s icons. It has me more curious for his typical stuff and whether it has a more jazz, pop, or soul feel—but that will have to wait for another blog!

If Christmas music is lacking in your life, five million people can’t be wrong. Give ol’ Harry Connick Jr a shot today. Word is there’s even an hour-long TV special of this album if that’s more your speed. Happy Tuesday and Merry Christmas!