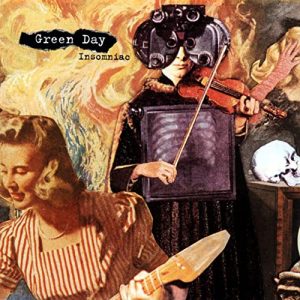 Everyone has a comfort foods—like your grandma’s creamy mashed potatoes every Thanksgiving—and I know musically I have some, too. For me, ‘90s alt rock always makes me feel at home no matter what else is going on in my life. Today’s featured act is about as iconic grunge as it gets and was on everyone’s playlist in those times—including mine.

As was discussed on the blog way back in 2018 (don’t those seem like so much simpler times these days?), Green Day’s Dookie was the first album I ever owned. The band ended up winning the Grammy Award in 1995 for Best Alternative Album and was nominated for nine MTV Video Music Awards to boot. It was safe to say Green Day took the world by storm and were undeniably one of the biggest acts in the business. They were hired to create the lead single for a 1995 movie called Angus—a tune called “J.A.R.”—and even the soundtrack single hit the charts. Reprise Records knew they had to continue to milk their cash cow and encouraged Green Day to get back into the studio ASAP to rock out another commercial record. They flew the band to San Francisco’s Hyde Street studios and got them working. The guys wanted to focus on high-energy takes only and create something that felt in many ways, completely different from Dookie.

They sold 10 million of Dookie which is a lot, and the label expected similar results when their new album dropped—expectations that were impossible to meet. Front man Billie Joe Armstrong was already taking shots from fans who felt that Dookie’s commercial sound alienated their humble punk beginnings. In fact, Armstrong admits to feeling lost at that time, feeling like he wanted to please their core fans, but also still make lots of money by selling lots of records—two things that generally do not go hand in hand.

Their follow-up album was Insomniac which came out in October of 1995. Hoping to hit that middle ground, the album ended up being much darker and heavier to hopefully re-attract the purists. But it also had a couple singles they knew could be instant radio hits. Rolling Stone was the first to point out the lyrics exemplified “cold-eyed realism, not trendy nihilism or bleak despair”—and that point resonated with fans from most walks of life. Armstrong spent hours polishing every song to make it feel flawless and with no wasted effort, drawing comparisons to albums by The Beatles or Cheap Trick. What you were getting here was Green Day, not a striped down, commercialized version. They wanted to prove they belonged, not just in the punk-sphere, but could make music that was generational.

If the proof was only in the sales pudding, I guess you could argue they failed. The album has only sold about five million copies to date—a far cry from the twenty-five million that its predecessor reeled in. But strictly from a legacy perspective, looking back on it now, Insomniac was almost the album that cemented their fate. Many fans were disappointed it wasn’t the 40-minute slayer that Dookie was, but after you put it down for a bit, you went back to it and respected it more and more. Here we sit 25 years later, and their most played song on Spotify came from this record is “Brain Stew”.

Armstrong may have been at his strongest vocal on this album and put him on that rare Mt. Rushmore of identifiable vocalists from that era. Plus the sound came out as more of an in-your-face punk metal, instead of the angsty, alt rock that perhaps their previous efforts were. It made them multi-faceted in a way that no one would have given them credit for prior.

Green Day’s career took several twists and turns after the release of Insomniac—fodder for future blog posts perhaps. It was an absolute joy for me going back to this one today, and likely will be for you too. You may be counting sheep but running out, on your own, but here we go! Happy Tuesday!

Summer Olympics starting soon!
Tips to boost your Wi-Fi signal and get more out of your internet connection