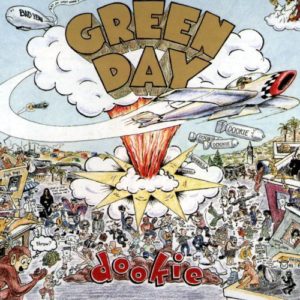 In 1986 Billie Joe Armstrong and Mike Dirnt were fourteen years old and formed a band called Sweet Children. They played a BBQ restaurant in California to a lukewarm reception. Unfazed, a couple years later they added a drummer and booked larger venues. The resiliency paid off, as they were signed to a small label in 1989 and recorded their first EP. Thinking the childish band name no longer fit, they switched it to Green Day before the release.

Picking up some major steam, Green Day released a couple of studio-length albums. Their second was so popular in the underground music world that major labels were beginning to take notice. When they heard the small under-produced and under-distributed record sold over 50,000 copies without any marketing, the bidding price went up further. Eventually Reprise Records won the race and they immediately put the band in the studio.

Only after three weeks of recording, their debut album was set to go. Dookie was released in February of 1994 to instantaneous success. MTV was their best friend, constantly airing three or four music videos of theirs around the clock. As if things couldn’t go any better, the band put on a classic performance at Woodstock ’94, also started a mud fight, and Dirnt got his teeth knocked out by an overzealous security guard who mistook him as a stage-invading fan. The buzz was so incredible, Dookie reached platinum status by the RIAA within a year and is now certified diamond in the U.S. with over 20 million copies sold worldwide.

Critically, it’s a unanimous smash hit. It’s been called a “landmark album of the 90’s” and one of few that only gets better with age. In addition to being considered the best album of the year by many outlets, it’s also featured as one of the best albums of all-time as well.

When you put this on, it’s easy to understand the appeal. It’s punk rock—full of anti-establishment rhetoric and the youth at the time easily identified with the hard sound. But even if that isn’t your style, there is a toe-tapping pop element to it that kids and parents alike from ’94 could enjoy. Funky bass lines and up-tempo guitar work made this extremely radio friendly and, given that all the songs are under four minutes, music video friendly as well.

The sound doesn’t necessarily vary much from start to finish, but that’s not a bad thing at all. It’s almost like 40 minutes of one awesome jam track. No contemplative ballads or songs that make you ponder the meaning of life—just a knock-down, drag out, in-your-face punk/pop album, and it’s one for the ages.

For me, this was the first album I ever personally owned, and I never would have imagined being proud of that fact two decades later.

The same three guys from Dookie twenty-four years ago are still touring and making new music today. VH1 ranked them the 91st greatest artist of all time and their induction into the Rock and Roll Hall of Fame on their first year of eligibility in 2015 cemented their legacy. Their music and sound has pretty drastically changed over the years, but they’ve always seemed to maintain their look and overall gimmick that made them so popular. Highly recommend this one today, especially for $5 bucks. Put it on and welcome yourself to paradise.

Full disclosure, courtesy of the editor: The album has an explicit warning (that said, Common Sense Media users say it’s okay for kids 11+)

Data Privacy Day: Talking to your kids about internet safety & usage
What to watch other than the Super Bowl