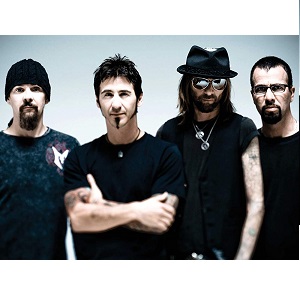 As I’ve mentioned in the past, a couple of dedicated readers occasionally remind me to toss out some hard rock albums for general consumption. Since my playlists have been filled with metal recently, it’s time to feature one of the more successful acts over the last couple decades.

In February of 1995, Sully Erna decided to start a new band, this time with himself at lead singer since he’d been in the back playing drums for over 20 years. It didn’t take long to assemble a new group—a standard guitar, bass, drummer set up—and they called themselves The Scam. After they recorded one demo, they decided on a name change and Godsmack was born. There was some controversy around their new moniker, since the band Alice in Chains had a song with the same name. Erna says the band was aware of the song, but they never gave any thought to it beyond respecting their work.

In ’96 Godsmack recorded their first EP in only three days for just over $2,000. Even though it helped them gain traction locally, it wasn’t until a single titled “Keep Away” got to a popular Boston night-time DJ that they really started to take off. The DJ put the song in regular rotation and Godsmack went from selling 50 copies a month to over a thousand a week.

In mid-1998, Universal/Republic Records picked up Godsmack and, after tweaking their lineup, wanted to get a CD out immediately. After listening to their self-produced EP, the execs at the label decided to remaster it and release it just six weeks later. With the simple title Godsmack, it hit stores in August of 1998.

The album put the band on the map. After years of local bookings, they finally got their first headlining tour—they even got invites to play a part on massive tours like Ozzfest and Woodstock ’99. Another highlight was supporting Black Sabbath on the European leg of their tour. The album itself opened at #22 on the Billboard 200. It cleared gold status in the U.S. within the first year and sits at 4x platinum currently, having sold nearly 10 million copies worldwide.

There are really a lot of things to talk about on this particular album, both ups and downs. On the positive side, it’s a pretty unique take on metal for the time period. Godsmack was one of the bands converting old school metal guitar and drums and fusing it with an alt rock feel. The sound was something different and Erna’s vocal was unmistakable and makes you wonder why he spent so many years behind the drum kit. When you hear one of their songs, you know it’s him and that his vocal was meant for metal singing.

On the negative side, the album itself caused some controversy. The late 90’s wasn’t necessarily used to this type of music or a band that didn’t seem to care about profanity in their lyrics. Somehow, the album was sold without an advisory sticker, and parents all over the U.S. were outraged. Some stores pulled the album from shelves; others simply chose to apply the tag. The controversy of course led to more sales, and more people getting exposed to a band they otherwise may not have crossed paths with.

Metal music can be polarizing, but for me, putting on that hard, fast, guitar-heavy music can really help me get through the day. No different than really beaty electronic jams, something about it gets the toes tapping and allows me to focus on whatever task I have at hand. Maybe this isn’t for everyone, especially those sensitive to cursing in music, but if you’re a metal nut, this album should be right up your alley. Give it a shot today, you might just love it to the moon, baby— and you just won’t be able to keep away. Happy Tuesday!

How much TDS Fiber speed do you need?
It’s the perfect season for a security refresher