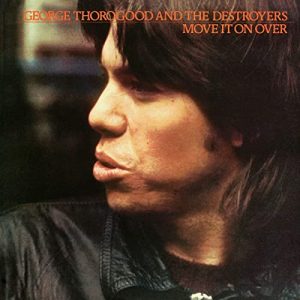 The phrase ‘guilty pleasure’ seems to always have a negative connotation to it. Like whatever it is that you enjoy is somehow not as good as what’s in the mainstream. Today’s featured artist is an absolute favorite of mine—and I don’t feel guilty listening to his work, even though he often gets labeled that way.

George Thorogood was born in February of 1950 in Wilmington, Delaware. He began playing music as an acoustic solo act in the style of classic blues performers. After attending a John P. Hammond concert in 1970, George was inspired to get into the business. After a couple years, he formed a band called the Delaware Destroyers in ’73. When it started, it was just George and a high school buddy, but over the years turned into a five-piece band (three guitarists, drums, and a saxophone). They were belting out a mixture of Chicago blues and straight rock and roll. They played local gigs on college campuses and dive bars. Eventually the ‘Delaware’ was dropped, and George Thorogood and the Destroyers was born. It would take until 1977 for the band to finally get a recording deal and release their debut album.

While the debut album was solid and has probably my favorite Thorogood tune of all-time on it (“One Bourbon, One Scotch and One Beer”), the sophomore album is truly what put George and the Destroyers on the map. Move It On Over hit shelves in November of 1978 and was titled after the lead single—a cover of the 1947 Hank Williams classic. The single saw significant FM radio airplay during the time, something a bit unusual for covers back in the day. They’d go on to repeat that unexpected success recipe with the cover of Bo Diddley’s “Who Do You Love?’ from 1956.

Critics loved the more polished sound of the second record, and that they also stayed true to their blues roots by doing it their way. Commercial success was there too. It charted at No. 33 on the Billboard 200, which was no small feat for sort of a niche genre album. Fun fact, it also charted in Australia and New Zealand too. The album has sold roughly a million copies to date worldwide—not Earth-shattering figures, but decent for a guy that certainly isn’t a household name.

Being a product of Milwaukee, home of the massive Summerfest concert, I bet I’ve seen George play at least two dozen times. It felt like he was an annual staple of that show for decades. I can’t emphasize enough how fun his shows are. He could be playing to 10 or 10,000 and you still get a very intimate experience. The Destroyers know how to jam—if you like extended rock riffs and blues run-ons, you’ll love their shows. They come across as a group of guys who simply love playing and that, for them, it doesn’t feel like work. As an audience member, you can appreciate listening to insanely talented musicians that feel like they’re playing in their back yard. In the early ‘80s they really broke through when they were booked as a support act for the Rolling Stones during the U.S. tour. And while their popularity is perhaps declining with more recent generations, anyone who picks this music up is sure to find a toe-tapping tune they identify with.

George and the guys are still touring today and I highly recommend catching them if they make it to your town. They haven’t put any new material out since 2011, but that’s a-okay by me. Their classics are still outstanding and have withstood the test of time. Move over nice dog, the mean old dog is movin’ in! Happy Tuesday!