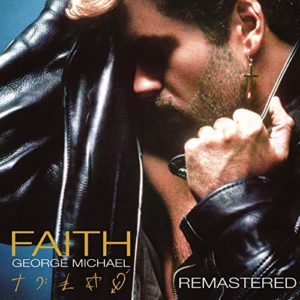 Another loyal reader request this week—that makes it two in a row!

She calls it a ‘mayon-egg’…oh wait, wrong George Michael. Unlike the youngest Bluth from the show Arrested Development, today’s featured artist was not only a real person, but arguably one of the biggest pop acts in history. Selling nearly 120 million albums worldwide in his career, the sales justify the statement.

George Panayiotou was born in London in June of 1963. Dad was a Greek emigrant and mom was an English dancer. George’s maternal grandmother was Jewish, but hid that fact after marrying a non-Jewish man and being fearful during World War II. In his early teens, George moved to a new town with the family where he met his future bandmate Andrew Ridgeley who had the same career ambition of being a musician. With George getting side jobs as a DJ playing local school and clubs, they’d eventually form their own band called Wham! in 1981.

Shortening his name to just George Michael at this point, Wham! had immense success both in Europe and the states. The duo sold nearly 20 million albums worldwide just over three studio releases covering only four years. Safe to say, the popularity created a market for George to go solo, which he would do in 1987.

He started with a duet with famed singer Aretha Franklin that would rise to #1 on the U.K. charts, giving George all the confidence he needed to really dive into his solo career. Eager to prove he was more than just a teenybopper act, he got into the studio and spent most of 1987 writing and recording. In November of that year, Faith was released as a contemporary R&B/pop crossover record. George was focused on introspective lyrics, dealing with personal relationships mostly. It ran the gambit of pop to R&B, but also incorporated elements of jazz and synth-pop as well. It’s an 80’s album through and through, but certainly some elements stand up to more modern recordings.

Reception for Faith was incredible, winning several awards—including the Grammy Award for ‘Album of the Year’ in 1989. It’s received the elusive diamond extreme certification by the RIAA in the states (10M plus), and has sold conservatively 25 million copies worldwide.

Admittedly, I can’t proclaim myself to be the biggest George Michael or Wham! fan of all time. I expected to know a couple songs, and I ended up knowing most of this album when listening to it today. Given seven of the nine studio tracks were released as commercial singles, that’s not overly shocking. He would become the only British male solo artist to have four number one singles off one album on the Billboard Hot 100.

When I listen to this particular record, and especially a track like ‘One More Try’, you hear not only the quality of George’s vocal, but the true soulfulness in his voice and his lyrics. Yeah, it’s poppy music that you can sing along to, but there’s a deeper attraction to his music that transcended above the work he did in Wham!—and I think that was the biggest appeal to his solo work, and perhaps why he sold so many copies.

Unfortunately, George passed away on Christmas Day in 2016 due to complications from liver and heart problems. In my history in not only blogging, but just as a passionate music fan, I’m not sure I’ve ever seen an artist only release eight albums with the kinds of sales he did. It’s a true testament to how popular and talented George Michael was. Throwback to this today, and for only $5 bucks, it’s a steal. It’s a hard day to pass up that kind of deal, and I have all the faith you’ll enjoy it too.

Warning: USB charging cables could hijack your device
A jaw-dropping look inside the phishing industry