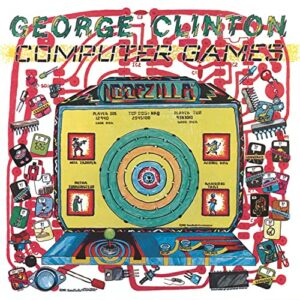 By Austin Krueger on September 21, 2021 in Online Life

Last week’s feature was a pretty quintessential U.S. ‘80s act with a worldly flair. Today’s artist is also from the ‘80s—but there isn’t anything typical about the music or the act. Since I’ve personally only heard a handful of singles, I’m excited to dig into a feature length record. Let’s do it!

George Edward Clinton was born in Kannapolis, North Carolina in July of 1941. As a child he moved to Plainfield, New Jersey and, as a teen, he formed a doo-wop group inspired by Frankie Lymon and the Teenagers. They were called The Parliaments and when Clinton wasn’t singing, he worked straightening hair at a local salon. He’d parlay this into partial ownership of a barbershop staffed by various members of his future band. The shop was considered the place to be for local singers and musicians in the ‘50s and‘60s if you were even remotely into the funk scene. Clinton broke into the music industry in the ‘60s as a staff songwriter for Motown. Eventually he’d turn The Parliaments into just “Parliament” in 1968 and a sister act called Funkadelic. George was the leader and manager of both groups. Parliament would release nine albums from 1970-1980, all seeing some level of modest success. Two of the albums are certified platinum today in the states.

Today however, I’m focused on Clinton’s first “solo” album—in quotes because the album features pretty much all the same personnel that appeared in Parliament and Funkadelic at the time. Computer Games hit shelves in November of 1982 via Capitol Records. This was released fresh off the heels of mounting financial and personal struggles for Clinton, and the hope was the effort would restore his popularity. The album would hit No. 40 in the Billboard 200 and get up to No. 3 on the R&B charts.

Critically, the album was recognized as pioneering, even during its original release period. Trouser Press magazine in New York remarked how it was a “nod to the burgeoning wave of techno-funk that was beginning to overtake almost every other form of dance music.” Computer Games spawned two commercial singles, with “Atomic Dog” hitting No.1 and being one of the most recognized funk songs every recorded—still seeing rotation today. Slant Magazine has this as the 97th best album of the ‘80s, which pending your musical preferences and opinion of the decade, could be quite the compliment.

So, what makes this album so different and unique? Technology in music was just beginning, and for the most part, it was being rejected. Major acts and critics viewed it as a crutch for artists who didn’t have actual musical talent to create a popular sound and sell albums. Clinton felt the exact opposite and used this new tech to inspire his creative genius. He adapted it in a way that no one had ever seen before, and new sounds usually get panned by just about everyone. The heavy synth, drum machines, sound effects and faders may almost seem cliché in hindsight—but were completely fresh at the time, so thinking about what this album created is simply amazing. You can listen to one or two tracks and if you’re a fan of modern hip-hop at all, you can hear all the samples that got and continue to get used in modern culture. R&B and rap music is what it is because of pioneers like Clinton and the P-Funk all stars.

While Clinton tried to capitalize on the album with other efforts, unfortunately it was probably the zenith of his career from a sales perspective. It doesn’t change his iconic status however, as his (and James Brown’s) music is probably the most sampled in modern rap history. Clinton was even awarded an Honorary Doctorate of Music from Berklee College of Music for his influences in society. That’s a level of respect very few achieve. Give Computer Games a shot today, you might find yourself needing a bit more P-Funk in your life! Happy Tuesday!