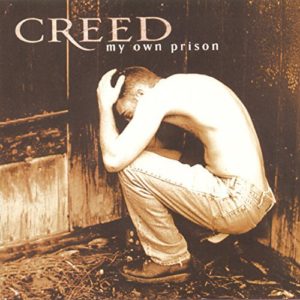 By Austin Krueger on February 6, 2018 in Online Life

Timing is everything. Not just in everyday life—but certainly in the music business. You may have a great band with a great sound, but that simply may not be what’s mainstream at the time. Instead of selling millions of albums, you’re stuck with hundreds. Today’s band overcame an early deficit and went on to be in the top 50 of albums sold all-time.

In 1993 down in Tallahassee, Florida, Scott Stapp and Mark Tremonti were high school friends attending Florida State. Both loved performing and writing and decided to start a band. Many of the songs focused around Christian theology and spirituality due to Stapp’s religious upbringing being the stepson of a Pentecostal minister. By the end of ’95, they were a foursome and were making the local beat in the panhandle area.

People were digging their sound and overall vibe, but their band name at the time was Naked Toddler, based on a news story from the area. Admittedly it was confusing and off-putting. Their bassist had been in a band called Mattox Creed prior to joining, so they lopped off the front end and began going by the name Creed. When auditioning for gigs and record deals, they found most people simply weren’t interested in their post-grunge sound. Rock was proverbially dead. They began playing at chain restaurants to make ends meet—mostly due to their family-friendly lyrics.

Desiring nothing more than to play a ‘real’ venue, they persuaded a bar owner for a spot guaranteeing them an audience of 200 minimum. The manager was so impressed by a couple of their original tracks; he signed them to a deal. The debut album, titled My Own Prison was distributed around Florida by the small label and only cost $6,000 to make.

After generating some buzz, Wind-Up Records decided to fly to see them live and determine if a bigger deal made sense. Completely impressed and seeing the arena band potential, they picked up a three-album deal. The album was remixed to be more radio friendly and re-released nationally. At that time, fourteen other labels had passed on the band and the album. Wind-Up would get the last laugh, with the album absolutely blowing up in 1997. Singles would be released to major radio from October of 1997 through January of 1999. Over that duration, the album sold well over 5 million copies with nearly triple that as of today.

Creed has become a punch line for supposedly mediocre arena rock from the late ‘90s and early 2000’s. But I’m not sure the band isn’t laughing all the way to the bank having sold 60 million albums worldwide. Did the family-friendliness maybe water it down a bit? Were people truly sick of rock, grunge rock specifically and therefore this got put on the backburner? I’m not sure, but that’s an awful lot of sales for most people making fun of the band.

What I like about this record is the fact it’s still very fresh and original. Beyond this album, Creed went a fairly different direction with their sound and truly sold out to the pop charts. While the sophomore effort sold many more copies, the critical response wasn’t nearly as positive. This one feels like a rock album made in a garage somewhere, and the rawness gives it the charm.

Basically since the late 2000’s, Stapp has been in and out of his faith and rehab. The band went on to form a new group but reunited as Creed and released a fourth album in 2009. While they announced another new album, nothing has happened and the band seems to be on another hiatus. Either way, My Own Prison is a solid get today for $6 bucks, with such a good deal, no need to feel torn.