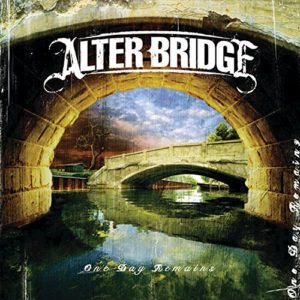 Philosophy isn’t my area of expertise, but I believe it was Alexander Graham Bell who said, “When one door closes another door opens, but we so often look so long and so regretfully upon the closed door, that we do not see the ones which open for us.” First and foremost, given our business, what a fitting gentleman to quote—but secondly, that quote proved false for today’s highlighted band. They turned the lemons in musical lemonade.

Mark Tremonti, Brian Marshall and Scott Phillips were members of the incredibly popular band Creed since 1993 when the band hit turmoil and broke up in 2003. Since most of the controversy was around lead singer Scott Stapp, the remaining three decided to reunite and start a new band. While looking for a new lead, the band all agreed a favorite act of theirs was The Mayfield Four, so they invited lead singer Myles Kennedy to be their lead. He accepted, and they were on their way. Tremonti was tasked with finding a name, so he selected Alter Bridge, which is an actual bridge near his home on Alter Road in Detroit, Michigan. The foursome was determined to put something out there as soon as possible, to deter from all the Creed reunion talk, and to hopefully outsell what they had done in the past. While it’s nice to have dreams, at that point in history, Creed had sold over 25 million records, so they had some pretty lofty goals.

Alter Bridge released their debut album “One Day Remains” in August of 2004. Picked up by a smaller label, Wind-Up Records, it seemed they were more focused on the quality over quantity. They even signed on a producer who had experience with such rock acts as Filer, Fuel and Sevendust. For comparison purposes, the album has sold roughly 750,000 copies and sits at Gold status. It reached all the up to #5 on the Billboard charts, and stayed up for fourteen weeks so in comparison with any other debut, it was a commercial success.

After their experiences with Creed, the record was named such because the band felt life should be lived as if only one day remains. Tremonti also hinted that it was a reference to the 2001 cult classic film Donnie Darko. Before settling on Alter Bridge, it was actually the name he almost chose for the band.

Backed behind the single “Open Your Eyes,” the album saw some decent radio play. Some of the popularity was due to entertainment company WWE picking up half a dozen songs from the album to use for entrances and pay-per-view events. The band credited WWE for opening them up to a new base of fans, and getting exposure when times weren’t looking so great. Because of that publicity, videogames like Madden 2005 and soundtracks like Marvel’s Fantastic Four and Elektra used tracks from this album as well.

If you’re a fan of Creed’s earlier work, before they got a bit more into the pop genre, you’ll enjoy this too. It’s pretty straight-forward rock music, maybe with a bit of a metal feel in spots. My favorite track “Metalingus” is a bit of a hybrid between the alt metal and grunge movement—a really nice change of pace compared to what you were getting at that time. By no means is this a perfect record, but it’s solid—start to finish. And to that, I’d argue better than any Creed record, which consistently had letdown tracks.

Alter Bridge is still out touring today, and in fact is renowned for their live performances. They also tour every year for months on end, which is rare in today’s music world. Open your eyes to this today, for $5 bucks, it certainly won’t make your day any worse, and might just give you that post-holiday boost you need.

Watch out for imposter scams!
You’ll find all the football you want on TDS TV®