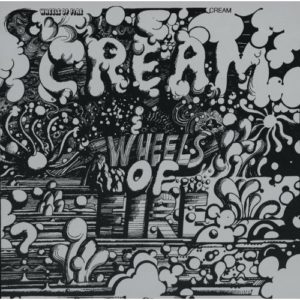 Normally when you think of a famous musician, they’ve played in five or six bands you never heard of before they hit it big. Today’s featured band showcases a talent that I’ve talked about before (when he was part of a later band that had one of the greatest records in rock history), but now I’m talking his efforts with a different group. It’s pretty safe to say this gentleman was at the forefront of music in the 1960s.

By July of 1966, Eric Clapton’s time with the Yardbirds and John Mayall & the Bluesbreakers made him the premier guitarist in Britain. He was looking for a new band and soon met Ginger Baker, who also felt stifled by his current band. They both had admired each other’s musical talents, prompting them to take a drive one night and discuss forming a new group. Clapton advised he wanted Jack Bruce to join the band, whom Baker had had various issues with in the past. Setting the quarrels aside, the vision was for this new three piece band to be totally collaborative, with writing and composition falling to all three men.

Since this was a supergroup of sorts, they called themselves Cream, since all three were the cream of the crop at their craft. They played various live shows, including one where the three jammed with Jimi Hendrix on stage, cultivating a big following across the pond. After releasing two records, both charting and performing well, Wheels Of Fire was released in July of 1968. It would reach number three in the U.K. and number one in the U.S., becoming the first platinum-selling double album in history.

The record marked a shift in sound for the band, generally getting away from the blues standards and moving toward a progressive rock type sound, still with blues mixed in. Since the band recorded during a major tour, some material was recorded in London and some in New York—they even had a mobile studio that followed them to Los Angeles and San Francisco. Disc Two features four tracks all recorded from live performances in California. They pulled out all the stops for this album, brought in a professional artist for the cover and a poet to write a couple of the tracks. It paid off in a record that sold over 5 million copies, but no real additional success from their prior work.

Anytime you listen to Eric Clapton, it doesn’t matter what the surrounding group of people were, you can rely on hearing some phenomenal guitar work. Bruce’s vocals are also a signature of this album, especially the more ballad tracks. I don’t think I’d make the argument that this is my favorite Clapton work of all time, or maybe not even my favorite Cream record, but it’s certainly an album worth listening to. It’s number 205 on the Rolling Stone 500 greatest of all time, partially because of the influence in history. At a time when psychedelic rock was so big, you didn’t really have bands doing it like Cream did. Is has that feel, but it’s harder than say a Pink Floyd—you still get Clapton in full force, but with an arrangement unique to his catalog.

Of course the band didn’t survive long after this record. About a year later they all went their separate ways, each getting into a subsequent group that would find just as much success as Cream, if not more in some cases. Cream would be inducted into the Rock and Roll Hall of Fame in 1993, and put on a handful of shows in 2005—all of which sold out within an hour. Bruce passed away in 2014, and the other two have officially stated there would be no more shows under the Cream label. Music history for $5 bucks is like giving it away, take advantage on this Cheap Tunes Tuesday – Classic Standards Edition.