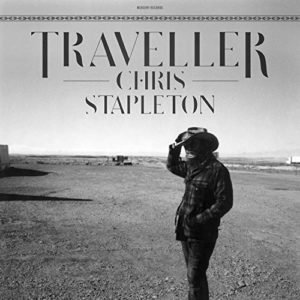 It’s likely documented that good ol’ fashioned country music isn’t really in my standard rotation. Unless the last name of the artist is Cash, I probably haven’t heard it. So it’s appreciated when friends of CTT ask me to listen to that genre, since it opens my doors to new tunes. Today’s featured artist is new to me—let’s dig in!

Christopher Alvin Stapleton was born in Lexington, Kentucky in April of 1978. His mom worked at the local health department and his dad was a coal miner. In fact, Chris grew up from a family of coal miners. Chris, the middle child, didn’t seem to focus too much on music or the arts as a youngster. Growing up in a very small town called Staffordsville, his big extracurricular was playing football but he graduated high school as the class salutatorian. He was admitted to the prestigious Vanderbilt University for engineering, but dropped out after one year.

In 2001, Chris moved to Nashville to pursue music—but not as an artist. Chris felt he could make his impact by being a writer and signed to Sea Gayle Music, a publishing house in Nashville. To date, he’s amassed over 170 writing credits between his own albums and others. He’s got six number-one singles to his name, including writing for well-regarded artists like Kenny Chesney, George Strait and Luke Bryan.

In 2007, Chris became the frontman of a band called The Steeldrivers. That first taste of singing would lead to working with a couple other groups, then eventually his solo career. His debut album Traveller was released in May of 2015. Plucking band members from his years of experience in the business, he pulled together the people he felt exactly fit the vibe of the album.

Stapleton said Traveller was inspired by a cross-country road trip he took after his father passed in 2013. He wrote the title track while driving down I40 from Phoenix back to Nashville via New Mexico. He credits his wife though, for helping to sift through 15 years’ worth of his songs to pick the nine tracks. The album reached number one on the Billboard 200 after a duet performance with Justin Timberlake at the 2015 CMA’s. Sales were solid—selling nearly 700k in the first few months. To date, it sits at roughly 5 million worldwide. For his efforts, Stapleton was awarded album of the year at the 2015 CMA’s and he even received a nomination for Album of The Year and Best Country Album at the 58th Grammy Awards, winning the latter.

Digging into this particular artist for the first time today, I’m pretty blown away. It’s not the typical country music sound you hear on the radio. It has almost a soul feel to it, and perhaps that’s unique to this record due to his father. But you could almost convince someone this is essentially a southern rock/blues type record on top of the underlying country themes.

Vocally, Stapleton is outstanding. His voice sticks out to me out of thousands I’ve heard in my life. When I read his biggest musical influences were Otis Redding, Ray Charles and Freddie King—it all kind of came together and started to make sense. Describing his music as a modern day Otis Redding mixed with a soulful country feel is probably the oddest, but most apt description one could give.

Stapleton has two more albums out, the most recent in late 2017. Recently he also appeared in an episode of Game of Thrones, cementing is popularity in multiple mediums. In 2018 he even opened for a couple shows for the Eagles, which would be a neat duo to see. Toss Traveller on today—it might just make your Tuesday travel into Wednesday, and that’s always a good feeling!

FCC: Get a one-ring call? Don’t call back
Making a network ready