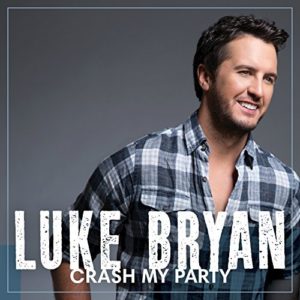 Sticking to last week’s theme, today’s artist is also a judge on the newly rebooted American Idol. I read the ratings are solid, pulling in nearly eight million viewers on their Sunday two-hour episode, so why not take advantage of their success? I’m also excited because before today, I couldn’t name a single track by this person, so the music is totally new to me.

Thomas Luther Bryan was born in rural Georgia in 1976. His father was a peanut farmer, and by the sounds of it, life was pretty tight for the family. He had two older siblings, one brother and one sister that both had a major influence on his life. Thomas always had a penchant for music and his family always thought he’d hit it big someday.

In 1995 Thomas was about to make the big move to Nashville and start his career. That all ended when his older brother was tragically killed in a car accident. He decided to stay closer to home, attend Georgia Southern University, and earn a degree. Seven years later, his father encouraged Thomas to pack up his truck and pursue his career in music. Finding some success early, he was invited to perform at the Grand Ole Opry and his sister scattered to get people to attend. She was able to pull in nearly 200 people and the performance went well. A few days later, she died unexpectedly at home for unknown reasons, the case remaining unsolved to this day.

Career wise, Thomas decided to shorten his middle name and go by Luke, and most of his early success would come as a songwriter for others. His first album debuted in 2007 to modest success, with the follow up generating a platinum certification. It wasn’t until 2011 when Luke would make a major splash and become a major player in the country music genre. Today I’m listening to his fourth studio effort Crash My Party which was released in August of 2013.

The first week the album sold nearly half a million copies despite of a mixed critical response. It opened at number one on the Billboard 200 and the top country charts. It broke a million in sales in just a month and became the third best-selling album of the year. Some praised the album calling Bryan the “modern day redneck” and the overall party theme. Others noted it felt a bit watered down in comparison to his previous works. Regardless, the album now sits at over five million sold worldwide, so the masses felt it was a solid album. It is currently Bryan’s highest-selling album to date.

Catching a small chunk of American Idol the second night, I’ve heard Luke Bryan’s name before, but everything else was new. I was a bit surprised by his vocal; it’s not what you normally get in a country singing male. He’s got this high baritone range, so you don’t get that Johnny Cash, classic country growl. His music is more of that contemporary pop-country, which can be hit-or-miss for me. Given his biggest influences were Alan Jackson, George Strait, Beastie Boys and Run D.M.C—you can understand why his music doesn’t conform to the standard country charts.

Since this isn’t necessarily my wheelhouse, I can’t comment on how unique it is, but I can tell you it gets the toe-tapping a bit. Most of the tracks seem a bit slower-paced, but the catchiness is undeniable and his vocal is signature.

Luke has obviously been through his share in life and he’s chosen to pay it forward. He’s been a major contributor to City of Hope, Red Cross, and supports various other cancer prevention and human rights organizations. I enjoy branching out in my musical tastes and supporting charitable giving, so give this one a shot today if you like the same (and if you’re already a fan of him or the music genre, it’s a no brainer). At $5.99, it certainly won’t crash your proverbial party.

Blockbusters and award-winners coming to TDS TV on Demand
Meet Raul Carozza, Volunteer of the Quarter